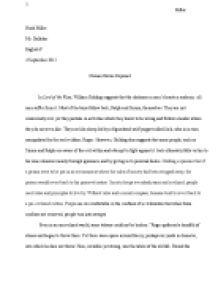 Human Nature in Lord of the Flies

﻿Miller Noah Miller Mr. Gallaher English F 4 September 2012 Human Nature Exposed In Lord of the Flies, William Golding suggests that the darkness in men?s hearts is endemic: all men suffer from it. Most of the boys follow Jack; Ralph and Simon, themselves. They are not consciously evil, yet they partake in activities which they know to be wrong and follow a leader whom they do not even like. They are like sheep led by a figurehead wolf puppet called Jack, who is in turn manipulated by the real evildoer, Roger. However, Golding also suggests that some people, such as Simon and Ralph are aware of the evil within and attempt to fight against it. Jack ultimately falls victim to his inner demons mainly through ignorance and by giving in to personal desire. Golding expresses that if a person were to be put in an environment where the rules of society had been stripped away, the person would revert back to his primeval nature. ...read more.

There is no structure or social compact to protect each individual from the one another. The individual reverts to his true form of human nature which is exposed throughout the book. Savagery starts in the nature of survival. The need to hunt, to eat, to over power an animal and then other humans simply to survive ends the bigguns need for their own humanity. ?His mind crowded with memories; memories of the knowledge that had come to them when they closed in on the struggling pig, knowledge that they had outwitted a living thing, imposed their will upon it, taken away its life like a long satisfying drink.? (Golding 76). This quotation, also from Chapter 4, explores Jack?s mental state in the aftermath of killing his first pig, another milestone in the boys? decline into savage behavior. Jack exults in the kill and is unable to think about anything else because his mind is ?crowded with memories? of the hunt. He is now ready to control everything he touches. ...read more.

However, the rescue is not a moment of absolute joy, for Ralph realizes that, although he is saved from death on the island, he will never be the same. He has lost his innocence and learned about the evil that lurks within all human beings. Here, Golding explicitly connects the sources of Ralph?s despair to two of the main themes of the novel: the end of innocence and the ?darkness of man?s heart,? the presence of savage instincts is lurking within all human beings, even at the height of civilization. Golding expresses his argument that if a person were to be put in an environment where the rules of society were stripped away, the person would revert back to his primeval nature. Society keeps everybody sane and civilized, and we need rules and principles by which to live. If people do not have rules and morals, humans will revert back to a pre-civilized culture. Society is so comfortable with civilization, when it is taken away; they turn into the ?Beasts?. Golding therefore teaches the reader that civilization is what binds men together as a society and without such; we would all be simply savages. ...read more.