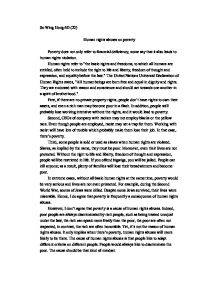 So Wing Hong 6D (22) Human rights abuses on poverty Poverty does not only refer to financial deficiency, some say that it also leads to human rights violation. Human rights refer to "the basic rights and freedoms, to which all humans are entitled, often held to include the right to life and liberty, freedom of thought and expression, and equality before the law." The United Nations Universal Declaration of Human Rights states, "All human beings are born free and equal in dignity and rights. They are endowed with reason and conscience and should act towards one another in a spirit of brotherhood." ...read more.

Working with racist will have lots of trouble which probably make them lose their job. In that case, there's poverty. Third, some people is sold or used as slaves when human rights are violated. Slaves, as implied by the name, they must be poor. Moreover, even their lives are not protected. Without the right to life and liberty, freedom of thought and expression, people will be restricted in life. If you offend bigwigs, you will be jailed. People can kill anyone; as a result, plenty of families will lose their breadwinners and become poor. ...read more.