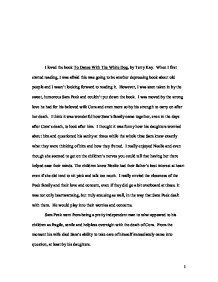 I loved the book To Dance With The White Dog, by Terry Kay. When I first started reading, I was afraid this was going to be another depressing book about old people and I wasn't looking forward to reading it.

I loved the book To Dance With The White Dog, by Terry Kay. When I first started reading, I was afraid this was going to be another depressing book about old people and I wasn't looking forward to reading it. However, I was soon taken in by the sweet, humorous Sam Peek and couldn't put down the book. I was moved by the strong love he had for his beloved wife Cora and even more so by his strength to carry on after her death. I think it was wonderful how Sam's family came together, even in the days after Cora's death, to look after him. I thought it was funny how his daughters worried about him and questioned his sanity at times while the whole time Sam knew exactly what they were thinking of him and how they fretted. I really enjoyed Neelie and even though she seemed to get on the children's nerves you could tell that having her there helped ease their minds. The children knew Neelie had their father's best interest at heart even if she did tend to nit pick and talk too much. I really envied the closeness of the Peek family and their love and concern, even if they did go a bit overboard at times. ...read more.

He was in a lot of pain and unable to stand up and get his medicine and when he finally was able to stand he collapsed. I can't imagine being in so much pain that I couldn't move and to be all alone at the same time with nobody to help me. It just made me realize that no matter how independent a person is they can't help it when their health fails and as much as they may not want to have to leave their home or have someone come to take care of them it is really out of their control. One thing I have definitely surmised from this is that I will have a ranch house in my older age. I figure if I have to carry two of my dogs down the stairs everyday now, that as an elderly person I am sure I wouldn't be able to get down them as well. Like everyone else you talk to before they hit old age, I never want to have to live in a nursing home. I want to be self-sufficient for as long as possible, much like Sam. Shortly after Cora died a white dog began to appear at Sam's house. ...read more.

That was a wonderful part of the book along with the ending when Sam's son James was at the cemetery and saw the paw prints across the grave of his father. I think that it is really important for the elderly to be able to stay at their homes for as long as possible, ideally until the end of their lives. Unfortunately, that is not always possible due to financial reasons, failing health or lack of family to help out. Sam was lucky that his family lived close by and could look out for him. This enabled him to stay home until the very end and in essence probably prolonged his life. He was also lucky that he stayed pretty healthy for as long as he did. Many elderly people aren't so lucky and must totally rely on someone else to help them with their daily needs much like a toddler needs their mother. It is sad for many to lose their independence and even harder to have to rely on their children for care when they are the parent, but that's what families are for, to be there for one another. Our parents raised us to be who were are today and the least we can do in return is to be sure that they are given the best care possible in their old age. 1 ...read more.