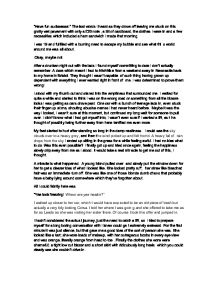 I stood with my thumb out and stared into the emptiness that surrounded me. I waited for quite a while and started to think I was on the wrong road or something from all the bizarre looks I was getting as cars drove past.

"Have fun suckaaaaa!" The last words I heard as they drove off leaving me stuck on this grotty wet pavement with only a �20 note, a bit of cardboard, the clothes I were in and a few necessities which included a ham sandwich I made that morning. I was 19 and fulfilled with a burning need to escape my bubble and see what this world around me was all about. Okay, maybe not. After a drunken night out with the lads I found myself committing to dare I don't actually remember. A dare which meant I had to hitchhike from a weekend away in Newcastle back to my home in Bristol. They thought I wasn't capable of such thing having grown up dependent with everything I ever wanted right in front of me. I was determined to prove them wrong! I stood with my thumb out and stared into the emptiness that surrounded me. I waited for quite a while and started to think I was on the wrong road or something from all the bizarre looks I was getting as cars drove past. One car with a bunch of teenage lads in, even stuck their finger up at me, shouting abusive names I had never heard before. ...read more.

I hadn't considered the actual journey, just the need to catch a lift, so I tried to prepare myself for a long boring conversation with I knew could get extremely awkward. For the first minute it was just silence, but that gave me a good idea of the sort of person she was. She looked like a tart; she wore loads of makeup, with her outrageous boobs in every eye view and was orange, literally orange from head to toe. Finally the clothes she wore were shameful; a tight low cut blazer and a short skirt with ridiculously long heels which you could clearly see she couldn't drive in. She asked me why I was hitchhiking so far, I paused trying to figure out an answer because I knew what I had to say would just make me look as stupid as her right now. I told her I got my wallet stolen and had no way of getting home. An absolute lie, but I knew she wasn't smart enough to ask for the real reason and catch me out. She just looked at me intensely and nodded her head, and then continued driving. ...read more.

I woke with my head pounding from the next room, not only would they not shut up, they resulted me in getting only 5 hours sleep which was certainly not enough for the day I had ahead of me. I headed down stairs after getting myself ready and got myself some well needed breakfast. Once I was ready, I popped on my boots and headed out into the city of Leeds. This time I felt different I felt ready to take on whatever comes and hits me. Now I'm not the sort of man to stand around waiting but standing on that motorway really makes you think about life as it passes you by. And once again I was stood for the second time waiting for someone to pull over. My day had only just begun, but I felt fresh, I felt ready and I felt I could really do this. After 2 hours of waiting, I thought someone would have pulled over, just when I thought things were looking up as well. I had a long wait in front of me; the only thing I looked forward to was a big mac for lunch. Thankfully there was a McDonalds half a mile up the road! ...read more.