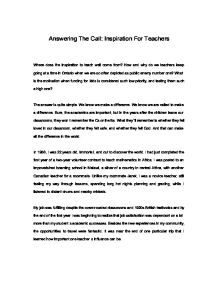 I was worried about accepting a lift in a vehicle with South African license plates. This was, after all, still the apartheid years, and Zambia had been bombed by the South African air force less than six months before our trip.

Answering The Call: Inspiration For Teachers Where does the inspiration to teach well come from? How and why do we teachers keep going at a time in Ontario when we are so often depicted as public enemy number one? What is the motivation when funding for kids is considered such low priority, and testing them such a high one? The answer is quite simple. We know we make a difference. We know we are called to make a difference. Sure, the academics are important, but in the years after the children leave our classrooms, they won t remember the Cs or the Bs. What they'll remember is whether they felt loved in our classroom, whether they felt safe, and whether they felt God. And that can make all the difference in the world. In 1986, I was 22 years old, immortal, and out to discover the world. I had just completed the first year of a two-year volunteer contract to teach mathematics in Africa. I was posted to an impoverished boarding school in Malawi, a sliver of a country in central Africa, with another Canadian teacher for a roommate. Unlike my roommate Janet, I was a novice teacher, still feeling my way through lessons, spending long hot nights planning and grading, while I listened to distant drums and nearby crickets. ...read more.

In the heat of an African afternoon, the soldiers were happy to do no more than a quick check of our papers and vehicle before retiring to the shade. We were actually beginning to enjoy the breathtaking views of the distant mountains, and close to the road, the sight of brilliant scarlet-leaved trees announcing a rainy season soon to come. Janet and I sat in the back of the pick-up for the entire journey and the breeze kept us cool as we covered our heads in the local cloth, or chitenge to prevent sunstroke. It wasn''t until we approached the last roadblock that the aggression I feared began to seem a reality. Right away we could tell things would be different. Even before we had completely stopped at the gate, a row of soldiers had risen and were facing us, rifles very much in evidence. As soon as we had braked completely, an officer walked angrily to the driver s side and ordered the three Americans out. Other soldiers gathered around, rifles in hand. Janet and I were frozen in the back unsure of what we should do. The Americans tried to explain that one of their company was too sick to stand, but the soldiers had no time for what they took to be excuses. ...read more.

I felt the ball of a scream stuck in my throat, but before I lost the struggle to control it, our new friend called out sharply to the other soldiers. I couldn t understand much of what he said but two words stood out again and again. Canada. And punzitzi, the word for teacher. After a moment the rifles slowly went down, and one of the soldiers gestured to the Americans to get back in the truck. They climbed slowly back into the cab as Janet and I held our breath. It didn t seem possible that we would get away so easily. But we did. When moments later we were headed on our way, and we had all finished a long shaky prayer of gratitude I remember wondering, as I still do today, if I could ever have the same effect on my students as that unknown teaching Father obviously had on his. That s what teaching is all about. Hoping that somewhere, somehow the children you have taught will grow up to make moral decisions in situations and places you can t even envision. We were lucky that that priest was Canadian like us. But even more, we were blessed that he was good at his vocation. Wherever he is, I thank him not just for that one brief moment in Zambia, but for the inspiration he has given me ever since. ...read more.