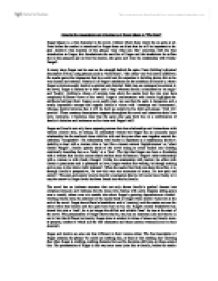 Importance of Roger Mason in 'The Spire'

Consider the presentation and importance of Roger Mason in "The Spire" Roger Mason is a vital character in the novel, without whom there would be no spire at all. Even before the reader is introduced to Roger there are hints that he will be important to the plot. Jocelin's first mention of the phrase 'cost what you like' coincides with the first introduction to Roger; this foreshadows the sacrifice of Roger and the breakdown he suffers due to the pressure put on him by Jocelin, the spire and even his relationship with Goody Pangall. In many ways Roger can be seen as the strength behind the spire. From Golding's physical description of him, using phrases such as 'bullet head', 'like a bear' and 'his heavy eyebrows', the reader gains the impression that he is solid and his expertise in building shows him to be very factual and rational. Nearly all of Roger's attributes are the antithesis to Jocelin's; where Roger is down-to-earth, Jocelin is spiritual and deluded. ...read more.

His relationship with Rachel is important as it emphasises Jocelin's inability to deal with a woman who is 'not like a decent reticent Englishwoman' or 'silent Goody Pangall', Jocelin spends much of the novel trying to avoid Rachel and Golding continually describes her as a 'body' or a 'face'. The fact that Roger can have a friendship with a woman that Jocelin cannot stand outlines their differences. Roger's other relationship with a woman is with Goody Pangall. Unlike his relationship with Rachel, his affair with Goody is passionate and is portrayed as love; Roger watches her walking 'as though nothing and no one in the whole world mattered'. When the reader first finds out about the affair, it is through Jocelin's perspective, 'he saw this was one encounter of many. He saw pain and sorrow'. The pain and sorrow may be Jocelin's realisation that he will never have Goody or it may be sorrow in Roger for he has been forced into this by Jocelin. ...read more.

The first description of Roger contains the phrase 'he could see nothing else, or hear or feel nothing else' showing that when Roger is working, nothing distracts him and he becomes oblivious to those around him. The presentation of Roger in this way once more joins him to Jocelin, before the reader has even been given a description of him. This illustrates how important Roger is to the novel and to Jocelin as a tool to build his vision. Overall I think that Golding's language when describing Roger is important because he is antithetical to Jocelin and therefore provides a comparison point. This has been used by Golding to draw attention to Jocelin's delusion and to allow the reader to see Jocelin's growing madness more clearly; however as the novel progresses it also becomes clear to the reader that Roger and Jocelin's characters become less and less contradictory. This is significant as it makes Jocelin's revelation at the end of the novel more pronounced and allows the reader to see that pure facts or pure faith are not effective, but it is a combination of the two that is needed for anything to be achieved. ...read more.