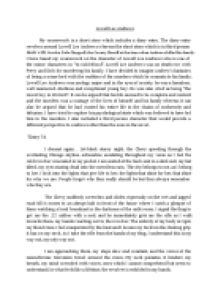 In Cold Blood: Creative Writing. My coursework is a short story which includes a diary entry. The diary entry revolves around Lowell Lee Andrews

﻿Lowell Lee Andrews My coursework is a short story which includes a diary entry. The diary entry revolves around Lowell Lee Andrews whereas the short story which is in third person deals with Gordon Dale Chappell, the County Sheriff at the time when Andrews killed his family. I have based my coursework on the character of Lowell Lee Andrews who is one of the minor characters in ?In Cold Blood?. Lowell Lee Andrews was on death row with Perry and Dick for murdering his family. I have decided to imagine Andrew?s fantasies of being a crime-lord with the realities of the murders which he commits to his family. Lowell Lee Andrews was zoology major and in the eyes of society, he was a harmless, well mannered, studious and exceptional young boy. He was also cited as being ?the nicest boy in Wolcott?. It can be argued that his life seemed to be complete and content and the murders was a wastage of the lives of himself and his family whereas it can also be argued that he had wasted his entire life in the chains of conformity and delusion. ...read more.

I am approaching them, my steps slow and constant, and the voices of the monochrome television travel around the room. My neck pulsates, it hinders my breath, my mind corroded with voices, ones which I cannot comprehend but seem to understand. In what feels like a lifetime, the revolver is enfolded in my hands. The room is now lit by fluorescents and I am standing above them waiting, waiting so impatiently to do the deed. As I catch a glimpse of her looking into me, I shoot her point blank and falls ever so gracefully to the floor, lifeless. As time stands still, they rise in horror; I gradually set my aim towards them as they reach out to me, her weak hands trembling, her fingers pointing out to me. I fire towards her, watching her as the bullets pierce through her futile body. She mumbles shattered words to me, I tell her to keep quiet and continue shooting till she can?t mumble anymore. ...read more.

Unlike Andrews who was always so polite and reading his books, Hickock and Smith would sit in the courtroom and joke and look out the window at the pretty girls and act like they didn't have a care in the world. Gordon found it hard to believe that such a soul could commit such a crime. He could not stop thinking about Andrews and his family, he wondered why, what seemed as such good grace and intentions turn out to be so dangerous that it lead to the wastage of his family?s own lives. When Gordon heard about the execution, he could not stay in the premises as it was too unreal for him to believe that Andrews was to be executed. There stood Andrews, before the hangman?s noose as the falling rain echoed throughout the deafening silence of the hall. He was unmoved and unbothered to what was inevitable. However, just before his final moments of life, he managed to gather a smile. Chappell was told that Lowell Lee Andrews had no last words. ...read more.