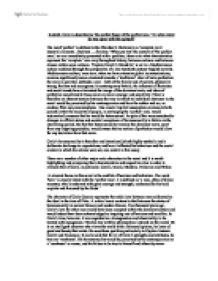 In death, Carlo is described as 'the perfect figure of the perfect man.' To what extent do you agree with this epitaph?

In death, Carlo is described as 'the perfect figure of the perfect man.' To what extent do you agree with this epitaph? The word 'perfect' is defined in the Chamber's Dictionary as 'complete in all essential elements...faultless.....flawless.' When put into the context of 'the perfect man', we are immediately presented with a problem; ideas as to what characteristics represent the 'complete' man vary throughout history, between cultures and between classes within some cultures. 'Captain Corelli's Mandolin' is set in a Mediterranean culture mediated through the perspective of a late twentieth century English novelist. Mediterranean culture, even now, when we have extensive global communications, remains significantly more orientated towards a 'traditional' ideal of male perfection: the male as provider, defender, ruler - both of the family and of society, physically strong, fearless and courageous. In contemporary Britain, the influence of feminism and social trends have eliminated the image of the dominant male, and ideas of perfection would tend to focus more on moral courage and sensitivity. There is therefore an inherent tension between the way in which an individual character in the novel would be perceived by his contemporaries and how the author and we, as readers, filter our preconceptions. One crucial implicit assumption common to both periods is that the majority of people, in envisaging the 'perfect' man, would automatically assume that he would be heterosexual. In spite of the very considerable changes in official status and societal acceptance of homosexuality in Britain in the intervening period, the fact that heterosexuality remains the dominant norm, apart from any lingering prejudice, would ensure that no notion of perfection would allow for any deviation from that norm. Carlo's homosexuality is therefore and intentionally both highly symbolic and a deliberate challenge to expectations, and how it affected his behaviour and the social context in which his actions were set, one central to this essay. There are a number of other major male characters in the novel and it is worth highlighting and comparing their characteristics and respective roles in order to evaluate that of Carlo, in particular, Corelli, Iannis, Mandras, Velisarios and Weber. ...read more.

Carlo shows the humility, selflessness and principle to do anything for the man he loves. We saw this first when he put his own life in danger by leaving the trenches to rescue Francesco, but this time he actually dies for what he believes in. 'Antonio Corelli, in a haze of nostalgia and forgetfulness, had found the titanic bulk of Carlo Guercio, had found his wrists gripped painfully in those mighty fists, had found himself unable to move.' This man is willing to die for what he loves and believes in. He loves Captain Corelli, recognises that his love is not reciprocated, but that Corelli and Pelagia share a deep, mutual love and does not want to see this love snuffed out like a candle flame, even though this entails great emotional pain and ultimately personal sacrifice. Although, arguably, Carlo was going to die anyway, so perhaps he was just subsequently merely ending his own life whilst doing something good. In the modern western world homosexuals are considered equal members of society and should not by law be treated any differently to any other heterosexual person. Therefore, a modern view of Carlo is sympathetic. However, the contemporary Greek or Italian view may have been that Carlo should not have kept his homosexuality to himself and should have seen a priest or doctor to 'cure' himself. In fact, Carlo considers this and justifies his denial brilliantly in his first chapter entitled 'L'Ommosesualle'. 'I will say to the priest that God made me as I am, that I had no choice.....I would say to the doctor, 'I have been like this from the first, it is nature that has moulded me, how am I supposed to change?' He is clear sighted, self-aware, and not at all self-pitying, in spite of his loneliness and forced life of denial and isolation. Perhaps it could be said that Carlo was weak in the way that he always kept his homosexual feelings to himself and lived his whole life in self-denial. ...read more.

'It was Velisarios who threw himself to task of the villages resurrection.... He himself clambered down into the well and began to pass up the rubble that had filled it... it was solely because of Velisarios that no one suffered thirst.' The heroism of Velisarios provides a strong contention to Carlo's claim to being the 'perfect' man, however de Bernieres does not explore the character of Velisarios in as much depth as Carlo, his character is largely superficial and we know very little about his own personal feelings, his love and his interests other than impressing people with his brute strength. To call someone 'the perfect figure of the perfect man' is a very extreme statement. This statement was made by Dr Iannis and when analysing it, it must be considered that at the time of making this judgement, Iannis was unaware of Carlo's homosexuality. Judging by Iannis's broad minded outlook and sense of perspective ahead of his time and setting, it is unlikely that his opinion would have been altered by knowledge of Carlo's orientation, however it is a fact worth taking into account. In my opinion, Carlo was 'the perfect figure of the perfect man'. I live in a modern society, influenced by the open and equal status shared by everyone in my country. I believe that the orientation of a person should not bear relation as to whether they can be considered 'perfect' or not. What I do consider a more difficult task is defining the word 'perfect', it is a complex word which means different to everybody and there is no unambiguous way to define it. As a result, when I use the word 'perfect' in the context of this essay, I consider both the modern English view and the contemporary Greek and Italian views. In this case, Carlo would not be considered a perfect man because of the homophobic culture which still exists in both of these countries. However, in modern England and to myself, the strength of character, devotion, liberalness and inner beauty of Carlo is enough to be named 'the perfect figure of the perfect man'. ...read more.