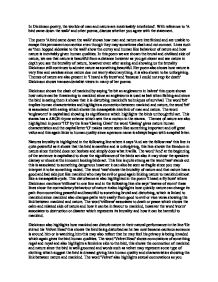 In Dickinson's poetry, the worlds of man and nature are inextricably interlinked'. With reference to 'A bird came down the walk' and other poems, discuss whether you agree with the statement.

In Dickinson poetry, the worlds of man and nature are inextricably interlinked'. With reference to 'A bird came down the walk' and other poems, discuss whether you agree with the statement. The poem 'A bird came down the walk' shows how man and nature are interlinked and are unable to escape this permanent connection even though they may sometimes clash and not connect. Lines such as 'then hopped sidewise to the wall' show the curtsy and human like behaviour of nature and how nature is inevitably given human qualities. In this poem we are shown the brutal and civilised side of nature, we see that nature is beautiful from a distance however as you get closer and see nature in depth you see the brutality of nature, however even after seeing and showing us the brutality Dickinson still continues to admire nature as something beautiful. Her poem also shows how nature is very free and careless since nature doe not worry about anything, it is also shown to be unforgiving. Themes of nature are also present in 'I heard a fly buzz' and 'because I could not stop for death' Dickinson shows transcendentalist views in many of her poems. Dickinson shows the clash of mankind by saying 'he bit an angleworm in halves' this quote shows how nature can be threatening to mankind since an angleworm is used as bait when fishing and since the bird is eating them it shows that it is disturbing mankind's techniques of survival. ...read more.

The word 'stillness' associates to death or peace which shows the calm and relaxed side of nature and how it can be in favour to mankind, however the word 'storm' associates to destruction or disaster which represents its brutality and how it can be harmful to mankind. Dickinson also highlights how mankind can disturb nature in their natural performance in the line 'He stirred his Velvet Head' this shows the bird being disturbed as he has now became cautious someone is around him or is watching him this may also reflect that he may feel his privacy is being invaded which again gives the bird human qualities. The word 'Velvet Head' shows connotations of something regal and royal and also highlights a feminine side to the bird, this shows the connection of mankind and nature since the bird is well groomed and words such as velvet may represent some type of clothing which suggest the bird is dressed giving him human quality and characteristics showing the link between nature and mankind. The word 'Velvet' also highlights sexual connotations as you interpret it to be something quite sexy or soft and feminine, further down in the poem the word 'seam' is used also showing something sexual as a seam is usually referred to in context to clothes. The capitalisation of the 'Velvet Head' again gives the bird importance and shows a status for him. ...read more.

In this line there is no significant punctuation used. The poem highlights her attempt to get to nature and get to understand nature however the bird does not let her. Dickinson may represent nature as god or something more powerful then mankind and she may be implying that she is trying to understand god or this force however it is so powerful that she is failing. Themes of god being represented in nature are also hinted in poem 465 in which Dickinson says 'And then the windows failed' this line implies that the barrier which was interfering in Dickinson death has failed. In this poem the fly may be interpreted as Satan as it is disturbing a command given by god, puritan values are also shown here as the fly fails to interrupt and death is successful showing that god holds the power. This shows how nature and mankind are interlinked since they can not escape each others realms. Overall Dickinson repeatedly shows the connection between mankind and nature as inescapable, she repeatedly shows how powerful nature is and how nature and mankind effect each other; 'Like one in danger, cautious,' this shows the reader that Dickinson values nature and gives nature the same respect as she would to mankind we know this since Dickinson constantly gives nature human values and qualities. Dickinson clearly highlights her importance for nature by linking it to god and linking it to mankind, showing her transcendentalist views. Fiza Ejaz ...read more.