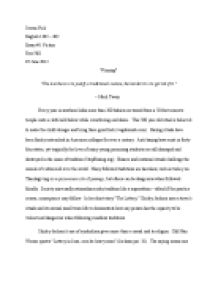 In her short story The Lottery, Shirley Jackson uses a towns rituals and its normal small town life to demonstrate how any person has the capacity to be violent and dangerous when following mindless traditions.

﻿Serena Pick English 1302 ? 302 Essay #1: Fiction Erin Hill 07 June 2012 Winning? ?The less there is to justify a traditional custom, the harder it is to get rid of it.? ? Mark Twain Every year in southern India more than 200 babies are tossed from a 50 foot concrete temple onto a cloth held below while crowds sing and dance. This 500 year old ritual is believed to make the child stronger and bring them good luck (vagabonish.com). Hazing rituals have been firmly entrenched in American colleges for over a century. Anti-hazing laws exist in forty-four states, yet tragically the lives of many young promising students are still damaged and destroyed in the name of tradition (StopHazing.org). Bizarre and irrational rituals challenge the morale of cultures all over the world. Many followed traditions are harmless, such as turkey on Thanksgiving or a quinceanera rite of passage, but others can be dangerous when followed blindly. Society universally rationalizes risky tradition like a superstition ? afraid if the practice ceases, consequence may follow. ...read more.

Jesus proclaims to the condemning crowd ?He who is without sin, cast the first stone? (John 8:7), and every person left the crowd one by one. Contrastingly, this village acts together reinforcing the point that the antagonist is not one person, but the society collectively. ?The Lottery? takes place annually on June 27th at 10 o?clock in the morning. Jackson cunningly describes the setting as ?clear and sunny, with the fresh warmth of a full-summer day; the flowers were blooming profusely and the grass was richly green? (Jackson par. 1). The use of warm and colorful imagery contributes to the reader?s impression that a happy event is going to take place. The ironic title of the short story itself suggests that someone will win a prize. Children are playing, women are gossiping, and men are talking about ?planting and rain, tractors and taxes? (Jackson par. 3). The casualness of conversation and playfulness of the children imply a normal, civilized little town. Jackson?s use of subtle details leads the reader to consider the town to be peculiar. ...read more.

Summers. Then, she participates in the annual slaughter. Her protest ?It isn?t fair, it isn?t right? (Jackson par.79) is declared when she draws the winning ticket? it?s personal. She would have been satisfied as the attacker had someone else won the lottery. There is no compassion exhibited for Tessie. Her close friend Mrs. Delacroix encouragingly tells her to ?Be a good sport? (Jackson par. 46), then ?selected a stone so large she had to pick it up with both hands? (Jackson par. 74). Her children laugh and beam with joy as they show their unmarked slips of paper to the crowd. Children, above all, join the barbaric ritual as ?someone gave little Davy Hutchinson a few pebbles? (Jackson par. 76) to throw at his mother. Shirley Jackson shows how tradition can be intensely dangerous even in an ordinary society. She raises important concern about the viral spread of harmful rituals from generation to generation, and the unquestioned acceptance of cruelty. She is successful in her purpose ?to shock the story?s readers with a graphic demonstration of the pointless violence and general inhumanity in their own lives? (Kennedy and Gioio pg. 247). ...read more.