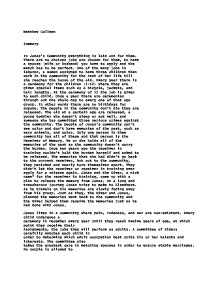 In Jonas&amp;#146; Community Everything Is Laid Out For Them.

Matthew Colleen Summary In Jonas's Community everything is laid out for them. There are no choices jobs are chosen for them, to have a spouse (wife or husband) you have to apply and the match has to be perfect. One of the many jobs is laborer, a women assigned to have three children then work in the community for the rest of her life till she reaches the house of the old. Every year there is a ceremony for the children (1-12) where they are given special items such as a bicycle, jackets, and hair lengths. At the ceremony of 12 the job is given to each child. Once a year there are ceremonies through out the whole day to every one of that age group. In other words there are no birthdays for anyone. The people in the community don't die they are released. The old at a certain age are released, a young toddler who doesn't sleep or act well, and someone who has committed three serious crimes against the community. The people of Jonas's community can't see color and don't have memories of the past, such as wars animals, and color. Only one person in thee community has all of these and that person is the Receiver of Memory. He or she holds all of the memories of the past so the community doesn't carry the burden. Once ten years ago the receiver in training couldn't hold the burden herself and asked to be released. The memories that she had didn't go back to the current receiver, but out to the community, they panicked and nearly tore themselves apart. They didn't let the receiver or receiver in training ever apply for a release again. Jonas and the Giver, a nick name" for the receiver in training, come up with a plan to release the memory from Jonas. On a long and treacherous journey Jonas tries to make to Elsewhere. ...read more.

Right up until that moment Jonas thougt that to be released meant to go live in a different community. He didn't know that to be released was to be killed. When he found out he got so mad that he escaped from his community. Jonas did not relax until he knew he was safe away from that awful community. He knew if he got caught he could be in an awful lot of trouble. As a matter of fact he could of gotten released himself. The Giver was a very interesting book. I suggest that children should read this book so that they can be able to learn a few things about life. As a matter of fact adults should read it to. Reading this book I got to learn alot of things. Like for example you haven't actually lived life until you have experienced real hurt and pain. The Giver is about a boy named Jonas who lives in the future in an almost perfect community. Jonas is chosen to be the person who carries all the memories of the past, given to him by the giver. It is by Lois Lowry. There are many good and bad things in the Giver. Some good things are that hardly anyone gets hurt. When people do get hurt they take a pill and the pain goes right away. No one ever breaks bones or anything. There are no criminals, and there are no locks on any homes or buildings. Another good thing is that everyone knows who everyone else is and it's a very small community with only a few hundred people. There are hardly ever any visitors from outside the community. Sometimes kids from other communities go play with the kids in the book's community. All the people are provided with homes, jobs, and food. A bad thing about the giver's community is release. ...read more.