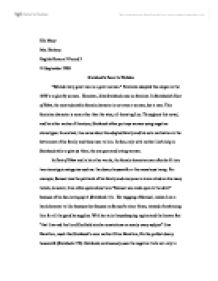 In many of Steinbeck's novels, women are described as dreary housewives or montrous tramps, but in East of Eden we see the evolution of a new kind of woman, one who is brought to goodness with guidance of a superior male.

Elle Macy Mrs. Harbour English Honors 3 Period 3 24 September 2009 Steinbeck's Favorite WoMan "Behind every great man is a great woman." Feminists adopted this slogan in the 1970's to glorify women. However, John Steinbeck was no feminist. In Steinbeck's East of Eden, the most admirable female character is not even a woman, but a man. This feminine character is none other than the wise, all-knowing Lee. Throughout this novel, and his other works of literature, Steinbeck often portrays women using negative stereotypes. In contrast, Lee cares about his adopted family and his sole motivation is the betterment of his family and those near to him. In fact, only with mother Lee's help is Steinbeck able to give us Abra, the one pure and loving woman. In East of Eden and in his other works, the female characters can often be fit into two stereotypic categories such as: the dreary housewife or the monstrous tramp. For example, Samuel was the patriarch of his family and everyone in town relied on his many talents, however; Liza often spoke about how "Samuel was wide open to the devil" because of his fun-loving spirit (Steinbeck 11). ...read more.

She symbolizes both Eve and the serpent because no human with a conscience could inflict the pain that she causes. In his novella Of Mice and Men, Steinbeck uses Curley's wife, who remains nameless, to symbolize the evil Eve. Steinbeck's negitive female characters may be connected to his divorce with second wife, Gwyndolyn Conger. Similarly to Adam, Steibeck's "attraction [to Gwendolyn] was electric and immediate," thus leading to a rushed marriage and two sons, which "brought tension... and Gwyn left" ("www.oprah.com"). For several months after, Steinbeck was still suffering emotional wreckage, leaving him questionable towards women's' motives. Following his multiple divorces, it seems that Steinbeck found it difficult to create a positive female character. In fact his first positive feminine character in East of Eden is a man and not a woman. Lee carries out the duties of the women of the house just as good, if not better, than his woman characters can. Lee, the servant of the house transforms himself into the caretaker, and mother, of Adam's neglected children. ...read more.

man's best woman. Lee takes an immediate liking towards Abra and in the end expresses how he "wishes you were my daughter" (Steinbeck 582). After reading this statement, one understands the love that Lee, and even Steinbeck, must have for Abra; the only admired female. What makes Abra so loved in comparison to the many other female characters? The only hint that Steinbeck provides is that she was the only one enlightened by Lee through the verse 'thou mayest.' He preached to her that she did not share the same sins as her father, but, at the same time, did not "have to be perfect... [to] be good" (Steinbeck 583). Through these teachings Abra was able to choose the moral life she wanted to live, while most accepted a role that was expected. This further describes Steinbeck's believe that a woman cannot separate herself from a stereotype unless she is guided by his favorite woman. In many of Steinbeck's novels, women are described as dreary housewives or montrous tramps, but in East of Eden we see the evolution of a new kind of woman, one who is brought to goodness with guidance of a superior male. ...read more.