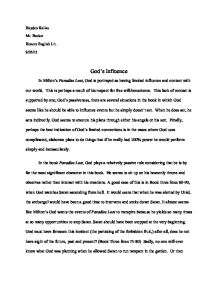 In Miltons Paradise Lost, God is portrayed as having limited influence and contact with our world. This is perhaps a result of his respect for free will/conscience.

Hayden Kallas Mr. Becker Honors English Lit. 9/26/11 God's Influence In Milton's Paradise Lost, God is portrayed as having limited influence and contact with our world. This is perhaps a result of his respect for free will/conscience. This lack of contact is supported by one; God's passiveness, there are several situations in the book in which God seems like he should be able to influence events but he simply doesn't act. When he does act, he acts indirectly. God seems to execute his plans through either his angels or his son. Finally, perhaps the best indication of God's limited connections is in the cases where God uses complicated, elaborate plans to do things that if he really had 100% power he would perform simply and immaculately. In the book Paradise Lost, God plays a relatively passive role considering that he is by far the most significant character in this book. He seems to sit up on his heavenly throne and observes rather than interact with his creations. ...read more.

A good question to ask at this point is just what are God's intentions? If he truly wanted a perfect heaven with conformist angels, what is stopping him from taking their free will? That leads to the point that possibly the reason why God's influence is limited is his own conscience, based on his respect of free will. When God does act in the story, it is almost exclusively indirectly through his Son, (as in Book Nine,) or through his Archangels. The most well-known case where God acts through his Son is when God sent him down to be sacrificed upon the cross. Although this specific event does not occur within this story, the reasoning behind it is lengthily discussed especially in Book Three. This however, only supports the thesis if one believes that Jesus is the son of God rather than the Christian view that God IS Jesus. (John, 8:58) Based on how Milton writes, it shows that he is using the interpretation of the Bible in which Jesus was created by God. ...read more.

Instead he schemes up the elaborate plan to send his son down to receive punishment in place of man. Once again, this could be explained by God having to act within the parameters of what his conscience will allow, (regarding free will). Maybe God has to do these elaborate things so that he can justify to himself the redemption of man. Maybe he thinks that it is only right that somebody receives punishment. Cases similar in nature occur when God didn't keep Satan from entering the Garden of Eden and when he had to send the great flood. If not for his respect for free will, God wouldn't have had to allow mankind to sink so low. In Paradise Lost, Milton presents a God that is strangely limited in his actions and influence with his own creations. Whether through passiveness, indirectness, or a conscious "distancing of himself" God seems to allow many things to happen without direct intervention. However, this is not really a novel concept; people throughout history have questioned the concept of an all-powerful God in a very imperfect world. ...read more.