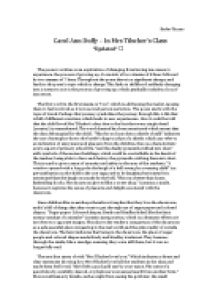 ï»¿Bader Tayyar Carol Ann Duffy – In Mrs Tilscher’s Class *Updated* ï The poem is written as an exploration of changing from having innocence to experience, the process of growing up. It consists of two stanzas of 8 lines followed by two stanzas of 7 lines. Throughout the poem there is a significant change, and leads to the poem’s topic which is change. This links to childhood suddenly changing into a memory as it is the process of growing up; which gradually includes a loss of innocence. The first word in the first stanza is “You”, which is addressing the reader, causing them to feel involved as it is in second person narration. The poem starts with the topic of travel. Perhaps that journey symbolizes the journey through life; A life that is full of different countries, which leads to new experiences. Also it could be told that the child loved Mrs Tilscher’s class due to the fact that every single detail (country) is remembered. The word chanted has been mentioned which meant that the class felt magical for the child. “That for an hour, then a skittle of milk” indicates the use of metaphor due to the bottle’s shape as that of a ...read more.

?She?d left a good gold star by your name. The scent of a pencil slowly, carefully, shaved. A xylophone?s nonsense heard from another form.? Shows multisensory details, such as sight from seeing the gold star, the smell coming from a pencil, and the sound coming from a xylophone. Every sense is being used in the class of Mrs Tilscher. The xylophone has been indicated as a nonsense possibly because the xylophone was interrupting Mrs Tilscher?s class which the child did not obviously want; which thus shows how much the child loved Mrs Tilscher?s class. ?Over the Easter term, the inky tadpoles changed from commas into exclamation marks.? Tadpoles could be imagined as being the same shape as commas at birth, and later on growing up to be of similar shape of the exclamation mark, which is also a metaphor. The reason to why this sentence has been added could be because the Carol Ann Duffy would like to remind the readers of the main topic of the poem which is about change. (From the classroom innocence to the sad reality of the world) ?Three frogs hopped in the playground, freed by a dunce, followed by a line of kids, jumping and croaking away from the lunch queue.? Which adds a chaotic image and no longer is the paradise image indicated in the previous stanzas. ...read more.

?Reports were handed out.? The reports might also symbolize the end of childhood, as results are based on reflections of the past. ?You ran through the gates, impatient to be grown, as the sky split open into a thunderstorm.? The thunderstorm could represent danger and the future life that is going to be waiting for all the children. On the other hand, the thunderstorm might simply be talking about how all the children ran through the gates at once, which implies as though it were like a thunderstorm. There is no more safety that was once in Mrs Tilscher?s classroom. That safety that was represented by Mrs Tilscher?s class has been replaced by the danger, the excitement, the thrill, and the thunderstorm of growing up. I believe Carol Ann Duffy?s poem has been a great success, as it makes the reader think back to his/her life when you were a child, and how things have always changed as you were growing up. A lot of literary devices have been used which added an interesting touch to the poem in order to address the overall theme of growing up. Duffy has done a great job with giving the readers a lesson to be learned, which shows us how life has changed since childhood. -Bader Tayyar ...read more.