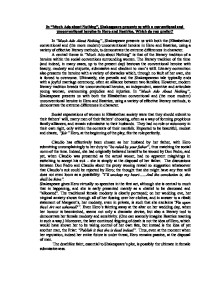 In &quot;Much Ado about Nothing&quot;, Shakespeare presents us with a conventional and unconventional heroine in Hero and Beatrice. Which do you prefer?

Shakespeare gives us a heroine capable of two different interpretations. Either we can see a jaded, aging, cynical and embittered spinster, who uses her wit and repartee defensively to gain attention, or we see Beatrice as an independent and feisty woman, courageous and loyal, determined not to fall into the expected role of submissive wife. "He that is more than a youth is not for me and he that is less than a man, I am not for him." The Beatrice that I find in "Much Ado" is the strong, independent atypical woman. It is interesting that this play is one of the few comedies in which none of the leading female characters dress up as a man in order to speak forthrightly or bluntly. The character of Beatrice has been written in such a way that this is her usual manner of speech. In her first interchange with Benedick, we see a woman who could not be more different from the reticent and passive Hero. We are given a woman who wants to dominate the conversation, who is witty, aggressive: "he wears his faith but as the fashion of his hat; it ever changes with the next block". Indeed, throughout the play, she is so direct as to be sometimes bawdy, with many references to stuffing and horns, allusions usually restricted to men. ...read more.

"Benedick, love on; I will requite thee" It cannot have been easy for Beatrice, of all characters, to discover that she has been tricked into falling in love with the man she has constantly and publicly ridiculed, but she is strong enough to put that to one side in her attempts to use the situation to avenge the wrongs done to Hero. Such a reaction takes the courage to put friendship before oneself. Even in her acceptance of Benedick, however, at the point of marriage, the continued verbal sparring between the two leaves us with the conviction that this is a marriage of equals and of mutual respect, not a passive submission to the expectations of society. Beatrice, one feels, retains her integrity. Can that be said of Hero? Thus in "Much Ado about Nothing", William Shakespeare gives us two very different versions of heroines: the conventional, submissive, passive, Elizabethan literary ideal and the independent, witty self-determining Woman. Even in his contrasting use of language, largely blank verse for Hero and prose for Beatrice, Shakespeare draws sharp contrasts. One is buffeted by forces around her, at the disposal of the whims of men, the other strives to control her own destiny, and proves able to adapt and change in a mature and self-knowing way. Hero in many ways appears little more than a two-dimensional stereotype of her time. Beatrice jumps off the page as a person both believable and worth knowing today. I prefer Beatrice. 1760 words Jenny Hoffman 10G ...read more.

After a slightly uncertain beginning, the essay gets into its stride and offers a very well-written argument. The style is concise yet includes sufficient textual detail and quotation to support the points made. The danger with a title like this is that the student will focus exclusively on aspects of character, but here reference is made to language use and dramatic technique as well .
*****