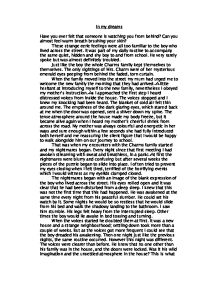 In my dreams Have you ever felt that someone is watching you from behind? Can you almost feel warm breath brushing your skin? These strange eerie feelings were all too familiar to the boy who lived across the street. It was part of my daily routine to accompany the same quiet, hidden and shy boy to and from school. He very rarely spoke but was almost definitely troubled. Just like the boy the whole Charms family kept themselves to themselves. The only sightings of Mrs. Charm were of her mysterious emerald eyes peeping from behind the faded, torn curtain. When the family moved into the street my mum had urged me to welcome the new family the morning that they had arrived. A little hesitant at introducing myself to the new family, nevertheless I obeyed my mother's instruction. As I approached the first step I heard distressed voices from inside the house. The voices stopped and I knew my knocking had been heard. The blanket of cold air felt thin around me. ...read more.

I saw him stumble. His legs felt heavy from the interrupted sleep. Other times the boy would lie awake in bed tossing and turning. When the voices started he doubted them at first. It was a new house and a strange neighbourhood; settling down took more than a couple of weeks. But as the voices got more frequent I could see that the boy dreaded his awakening. Then one night just like the previous nights, the same routine occurred. However this night was different. The voices were clearer than before. He knew that no one other than his family was in the house, and the doors were locked. Was it his wild imagination and the unsettled atmosphere in the house? This is what he had thought before. He simply dismissed it as his mind playing tricks on him. His dark troubled eyes guided his body back to his room. He stopped outside his parents' room and paused. ...read more.

Earlier in my dream I had seen the boy's father looking fearful, but did he fear for his life? When morning came I struggled to remember the shadowy goings on in the Charms house. As I rubbed my weary eyes and the light streamed through the gap in my curtain everything started to become clearer. Confused from my sleep I was unsure of what I had seen but now I was sure. My thoughts were broken by my mum's cheery smile, which lit up my room. I urged to tell my mum what had happened in my nightmare. I had been having them for weeks now and I had wanted to tell her then. I knew that she would not have thought anything of the strange family, she was always too busy. I was always making up stories. My mum called me the joker. I had a vivid imagination. That is why I doubted that the dreams were true at the beginning, but now I was sure. I explained to my mum about the nightmares. She smiled. I knew that smile. She did not believe me! ...read more.