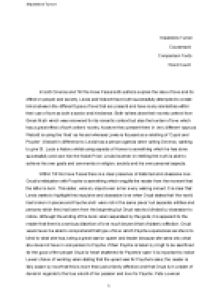 In Omeros and Till We Have Faces how do the authors explore the idea of love and its effect on people and society?

﻿Madeleine Turner Madeleine Turner Coursework Comparison Texts Word Count: In both Omeros and Till We Have Faces both authors explore the idea of love and its effect on people and society. Lewis and Walcott have both successfully attempted to create links between the different types of love that are present and have many similarities within their use of love as both a savior and hindrance. Both writers draw their novels context from Greek Myth which was renowned for its romantic context but also the burden of love which has a great effect of both writers? novels, however they present them in very different ways as Walcott is using the ?Iliad? as his aid whereas Lewis is focused as a retelling of ?Cupid and Psyche?. Walcott in difference to Lewis has a person agenda when writing Omeros; wanting to give St. Lucia a history whilst using aspects of Homer is something which he has done successfully and won him the Nobel Prize. Lewis however in retelling the myth is able to achieve his own goals and comments on religion, society and his own personal aspects. Within Till We have Faces there is a clear presence of distorted and obsessive love. Orual?s infatuation with Psyche is something which engulfs the reader from the moment that the latter is born. This sister, woman, object even is her every waking minuet. It is clear that Lewis wants to highlight this impulsive and obsessive love when Orual states that ?the world had broken in pieces and Psyche and I were not in the same piece? but separate entities and persons which they had been from the beginning but Orual was too blinded by obsession to notice. ...read more.

This same love for history could also be said for Lewis in Till We Have Faces; he has chosen to retell a myth and keeps ultimately to the basis of the story, showing his love and appreciation for the history. Although an atheist he still appreciates the ?existence? of the gods and has kept it true to form. Storge or the affectionate love mostly felt for family members is something is a web of complexity within both novels. In Till We Have Faces, this love is evident between Orual and Fox, her helper and somewhat of a guardian she states profoundly that 'I loved the Fox ... more than anyone I had yet known? and precedes to call him ?Grandfather? regardless of the fact that he is a slave of her fathers?. ?The Fox is portrayed lovingly, but his enlightened philosophy has an insufficiency about it? as put forward by Pete Lowman, however I believe that it is not his philosophy which is insufficient but the fact that he is not truly related to Orual and cannot give her the true family ties, similar to Psyche, who as much as Orual wants is not her true sister. Yet still she feels this strong affliction and yearning for them, which would mean that Orual is yearning for a true family life as her father (her only true living relative) has dubbed her ?ugly? and continuously taunts her for it whilst casting her aside. This suggests a lack of Storge on her father?s part and falls into one of the key themes on unrequited love. ...read more.

for the sake of love even if ?the lover who comes to her in the darkness is also part of the madness? it is irrelevant because what she feels is the truest form of agape. This sacrifice is something that Lewis wants the reader to be aware of so to see the purity of Psyche herself. In conclusion both Lewis and Walcott present love in very similar ways. They use it as a key theme with the novel and the epic so to create a depth and personal layer to the characters. It also enables them to comment on societies? view of love or lack of it in some cases and imprint their own personal vendetta into their works. Furthermore they both succeed in creating a layered plot with the different types of love felt between the characters but also the love for the ancient themselves. They have appealed to the modern reader by creating novels which accessible for all to relate too as well as commenting on the times which they are set. Walcott himself has used the device of love to create a link or his country through the different race of people but also the different character situation. Whereas Lewis as achieved the ideal of retelling a myth but placing his own individual aspects within the pages. Lewis has used love as the attraction and destruction of his tale. Both writers use love to have an inherent impact on their novel/epic. Ultimately both authors have shown that love is something that is both universal but also individual and applied it in very different ways but with equal success. ...read more.