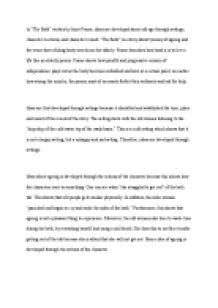 In The Bath written by Janet Frame, ideas are developed about old age through settings, characters actions, and characters mind.

Transfer-Encoding: chunked ﻿In ?The Bath? written by Janet Frame, ideas are developed about old age through settings, character?s actions, and character?s mind. ?The Bath? is a story about tyranny of ageing and the terror that a failing body wrecks on the elderly. Frame describes how hard it is to live a life like an elderly person. Frame shows how painful and progressive erosion of independence plays out as the body becomes enfeebled and how at a certain point, no matter how strong the mind is, the person must of necessity forfeit their authority and ask for help. ...read more.

Ideas about ageing is developed through the actions of the character because this shows how the characters react to something. One can see when ?she struggled to get out? of the bath tub. This shows that old people gets weaker physically. In addition, the elder woman ?panicked and began to cry and strike the sides of the bath.? Furthermore, this shows that ageing is not a pleasant thing to experience. Moreover, the old woman also tries to waste time during her bath, by rewashing herself and using a nail brush. ...read more.

and fall asleep.? This proves that she does not feel like living because of her tiredness after she visited the grave through buses and crossing streets. Thus, ideas about ageing is developed though the mind of the character. To conclude, people have more difficulty to live as they get older. This is mainly due to having a weaker body which lead the people to feel sad and unhappy. The women in this short story did not had the will to live after she noticed she is now physically weak and now needs help from other people like a nurse. Therefore, ideas are developed through settings, character?s actions, and character?s mind. ...read more.