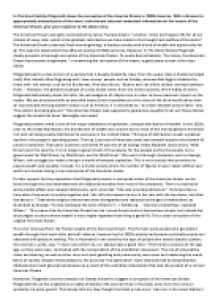 In The Great Gatsby Fitzgerald shows the corruption of the America Dream in 1920s America. With reference to appropriately selected parts of the novel, and relevant external contextual information on the nature of the American Dream, give your response to the above view.

Transfer-Encoding: chunked ﻿In The Great Gatsby Fitzgerald shows the corruption of the America Dream in 1920s America. With reference to appropriately selected parts of the novel, and relevant external contextual information on the nature of the American Dream, give your response to the above view. The American Dream was aptly summarised by James Truslow Adams: ?a better, richer and happier life for all our citizens of every rank, which is the greatest contribution we have made to the thought and welfare of the world.? The American Dream promised fresh new beginnings, a classless society and a land of wealth and opportunity for all. This was the ideal behind the affluent society of 1920s America. However, in The Great Gatsby Fitzgerald clearly presents a thorough corruption of the American Dream. To quote Bernie Sanders, ?For many, the American Dream has become a nightmare.? In examining the corruption of the dream, a good place to start is the class divide. Fitzgerald paints a clear picture of a society that is deeply divided by class. Even the upper class is divided amongst itself; Nick inhabits West Egg along with ?new-money? people such as Gatsby, whereas East Egg is inhabited by those with ?old money? such as the Buchanans. Nick describes a, ?bizarre and not a little sinister contrast between them.? However, the greatest example of a class divide stems from the intense poverty of the Valley of Ashes. ...read more.

Fitzgerald hints at the unglamorous reality of Gatsby?s life several times in the book, even from the rumours spread by his party guests: "Somebody told me they thought he killed a man once." Later on in the novel Gatsby?s own behaviour when Nick asks about his business suggests that he is not as pure as he likes to appear: ?I think he hardly knew what he was saying, for when I asked him what business he was in he answered, "That's my affair," before he realized that it wasn't the appropriate reply.? This web of secrecy and deceit suggests although the American Dream appears pure on the surface, it is built upon a web of criminality and corruption. Gatsby?s shady business is likely related to prohibition and the bootlegging of alcohol. This was a very common crime in the 1920s, and bars that sold alcohol were referred to as ?speakeasies.? An example of an affluent bootlegger is Al Capone. Within 2 years, Capone was earning $60 million a year from alcohol sales alone. However, his life was not a glamorous affair; he was caught and spent 11 years in jail. Gatsby never went to jail ? he got a life sentence instead. Fitzgerald suggests that criminality is the only way to achieve the American Dream, signifying that it has been exhaustively corrupted. In light of this, it perplexes me that anyone could claim the Fitzgerald presents a pure vision of the American Dream. ...read more.

This was the time of the Harlem Renaissance, a term used to describe a flowering of African-American literature and art in the 1920s, mainly in the Harlem district of New York City. During the mass migration of African Americans from the rural agricultural south to the urban industrial north, many who came to New York settled in Harlem, as did a good number of black New Yorkers moved from other areas of the city. For the first time they were respected as integral to the community. This was not a corruption of the American Dream, but a realisation of it, which promised equality for all. To conclude, after careful consideration we determine that Fitzgerald uses The Great Gatsby to display the corruption of the American Dream. He once said, ?The idea that we're the greatest people in the world because we have the most money in the world is ridiculous.? Ironically, the Wall Street Crash occurred not long after this statement was made; the American Dream was always founded on shaky ground and he reflects this in his novel. The opposing arguments have some merit but ultimately they fail to realise the true implications and context of The Great Gatsby. The final line of the novel shows how the dream always lives on, even if it cannot be fulfilled: ?so we beat on, boats against the current, borne back ceaselessly into the past.? ...read more.