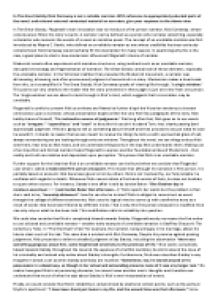 In The Great Gatsby Nick Carraway is not a reliable narrator. With reference to appropriately selected parts of the novel, and relevant external contextual material on narrators, give your response to the above view.

Transfer-Encoding: chunked ﻿In The Great Gatsby Nick Carraway is not a reliable narrator. With reference to appropriately selected parts of the novel, and relevant external contextual material on narrators, give your response to the above view. In The Great Gatsby, Fitzgerald?s main innovation was to introduce a first person narrator, Nick Carraway, whose consciousness filters the story?s events. A narrator can be defined as a person who narrates something, especially a character who recounts the events of a novel or narrative poem. The concept of an unreliable narrator was first introduced by Wayne C. Booth, who defined an unreliable narrator as one whose credibility has been seriously compromised. Nick Carraway would certainly fit this description for many reasons. In examining why this is the case, a good place to start is how modernism influenced Fitzgerald?s choice of narrator. Modernist novels often experiment with narrative structures, using methods such as an unreliable narrator, disrupted chronology and fragmentation of narrative. The Great Gatsby contains all of these elements, especially the unreliable narrator. In the Victorian tradition that preceded the Modernist movement, a narrator was all-knowing, all-seeing, and often pronounced judgment of some kind in a story. Modernism makes a clear break from this, as is exemplified in The Great Gatsby. Nick Carraway speaks of viewing life through, ?a single window.? This points out very clearly to the reader that the story presented in these pages is just one view from one person. ...read more.

That is why this first person viewpoint is modified: Nick can only rely on what he has been told. This modification calls his reliability into question. We could also consider that Nick is completely biased towards Gatsby. Fitzgerald was by no means the first writer to use a biased and unreliable narrator ? another early example of unreliable narration is Geoffrey Chaucer's The Canterbury Tales. In "The Merchant's Tale" for example, the narrator, being unhappy in his marriage, allows his bias to slant much of his tale. This same bias is evident with Nick Carraway. Despite his promise against passing judgement, Nick proceeds to deliver a detailed judgment of Jay Gatsby, including the observation ?there was something gorgeous about him, some heightened sensitivity to the promises of life.? Nick seems completely biased towards Gatsby throughout the novel at the expense of a truthful narration; he skirts around the issue of his criminality and instead only writes about Gatsby?s strengths. Furthermore, Nick even describes Gatsby?s very thoughts in detail, such as when Gatsby and Daisy are reunited: ?Sometimes, too, he stared around at his possessions in a dazed way, as though in her actual and astounding presence none of it was any longer real." No matter how good Nick is at perceiving character, he cannot know another man?s thoughts and therefore we understand that much of what he says about Gatsby is Nick?s own interpretation of events. ...read more.

Finally, it could be argued that Nick is a reliable narrator because he is the only character that recognises that the American Dream is flawed and he has the courage to move away from the East. In the closing chapter of the novel, Nick writes, ?After Gatsby?s death the East was haunted for me like that, distorted beyond my eyes? power of correction. So? I decided to come back home.? Nick claims that the Middle West is his true home, illustrating his nostalgia for home. The East, where he has been associated with for a while, represents materialism, corruption, and superficiality. However, this isn?t who Nick is and doesn?t want to be about this way of living. He claims the Midwest because it?s wholesome, innocent, and pure, all things Nick wants to be associated with. Unlike the rest of the characters, Nick is not drawn in by the American Dream and is able to objectively evaluate 1920s culture without being swayed by its many temptations, this increases his reliability as a narrator. To conclude, after careful consideration we determine that Nick Carraway is indeed an unreliable narrator. Perhaps this unreliability on Nick?s behalf epitomises the society of America at the time in which the novel is set in, and emphasises how nothing could be trusted at face value. The opposing arguments have some merit but ultimately they fail to realise the true implications and context of The Great Gatsby. ...read more.