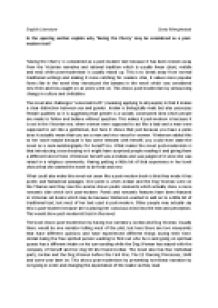 In the opening section explain why Sexing the Cherry may be considered as a post-modern text?

﻿English Literature Sonia Menghestab In the opening section explain why ?Sexing the Cherry? may be considered as a post-modern text? ?Sexing the Cherry? is considered as a post-modern text because it has been broken away from the Victorian narrative and rational tradition which is usually linear (start, middle and end) while post-modernism is usually mixed up. This is to break away from normal traditional writings and making it more catching for readers. Also, it values more popular forms like in the novel they introduced the banana in the novel which was considered new then and has caught on as years went on. This shows post-modernism by announcing change in culture and civilisation. The novel also challenges ??universal truth?? (meaning applying to all people) in that it makes a clear distinction between sex and gender. ...read more.

Having putting a little bit of that experience in her book shows that she wanted the novel to be fresh and new. What could also make this novel not seem like a post-modern book is that they made it has poetic and fantastical passages. One point is when Jordan and the Dog Woman were on the Thames and they saw the sunrise shows poetic elements which actually show a more romantic side which isn?t post-modern. Poetic and romantic features have been featured in Victorian set books which may be because Winterson wanted to add on to a little bit of traditional text, but most of her text used is post-modern. Other people may actually say this is post-modern because she is placing her conscious mind into the text and perception. This would show post-modernist text in the novel. ...read more.

The first chapter is of Jordan as a grown person and describing his setting then it jumps to when Dog Woman found him and losing him in a crowd of people. The jumps show post-modernism by not following rules of going in order making her novel individual and different to most Victorian based books. To conclude, ?Sexing the Cherry? may be considered as a post-modern text because it challenges things that wouldn?t be expected in a novel set in the Victorian era where everything was in classes and in order but here, it shows Jordan cross dressing, him having to travel which was a luxury and considering that he was a foundling makes it even more surprising because he started out with nothing other than Dog Woman. Also, having two narrators (Jordan and Dog Woman) makes it feel like there are two stories being told. This shows post-modern text because if drifts away from traditional writing. ...read more.