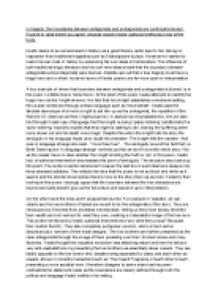 In tragedy, the boundaries between antagonists and protagonists are continually blurred. Explore to what extent you agree. Analyse closely Keats Authorial methods in two of the texts.

﻿In tragedy, the boundaries between antagonists and protagonists are continually blurred. Explore to what extent you agree. Analyse closely Keats? Authorial methods in two of the texts. Keats? desire to be remembered in history as a great literary writer lead to him taking on inspiration from traditional tragedies such as Shakespeare?s plays. However he wanted to make his own mark in history by advancing his own ideas in his literature. The influence of both traditional tragic literature and his own new ideas meant that the boundary between antagonists and protagonists were blurred. Aristotle set out that a true tragedy must have a tragic hero and a villain, however some of Keats? poems are far more open to interpretation. A key example of where that boundary between antagonists and protagonists is blurred, is in the poem ?La Belle Dame Sans Merci.? At the start of this poem Keats attempts to identify the tragic hero as the ?knight-at-arms?, the fact that he?s knight establishes a medieval setting, this is also reinforced through archaic language such as ?Woe betide!?. ...read more.

This is later reinforced by Keats? authorial interventions (?why were they proud? Because their marble founts?). They also completely juxtapose Lorenzo, who?s a hard worker described as a ?servant of their trade designs.? The two brothers are further presented as the clear antagonists through the image of them presiding over their ?torched mines and noisy factories.? Keats thought the industrial revolution was attacking nature and here he takes a very anti-capitalist tone by presenting the two brothers as essentially slave owners. They are totally opposite to the two lovers who, despite being separated by class, see each other as equals, shown in romantic metaphors such as ?The inward Fragrance of each other?s heart?, presenting a more socialist view. I therefore disagree to some extent as this poem contradicts the statement made as the boundaries are clearly defined through both the politics and language Keats? instills in his writing. However the knight in La Belle Dame sans Merci also fails to follow the conventions of a tragic hero, as does La Belle Dame herself. Here we see Keats? own ideas come into play as neither of the characters are tragic hero?s as defined traditionally by Aristotle. ...read more.

This all defines Isabel as the tragic hero and the main victim of the poem. First she loses the love of her life and is lied to by her brothers before even having her pot of basil taken from her. Her character falls further again and again, designed to truly reinforce the tragicness of her death and therefore defining her as the tragic hero. From this we can see that the statement is incorrect to a large extent as the boundaries are very distinct In conclusion, Keats most certainly blurs the boundary between protagonists and antagonists, more specifically where he adds his own ideas to his poetry. In his want to be remembered as a poet he pushes away the traditional conventions to a large extent in order to create characters and poems with far more depth and interpretation and in doing so he avoids establishing a clear protagonist and a clear antagonist. However when he takes poems from older literature such as Isabella he does stick to the classic tragic conventions of a tragic hero in order to remain true to the original stories. ...read more.