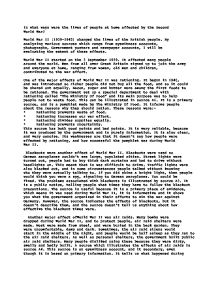 In what ways were the lives of people at home affected by the Second World War?

In what ways were the lives of people at home affected by the Second World War? World War II (1939-1945) changed the lives of the British people. By analyzing various sources which range from eyewitness accounts, photographs, Government posters and newspaper accounts, I will be evaluating the extent of these effects. World War II started on the 3 September 1939. It affected many people around the world. Men from all over Great Britain signed up to join the army and everyone at home, ranging from women, old men and children, contributed to the war effort. One of the major effects of World War II was rationing. It begun in 1940, and was introduced so richer people did not buy all the food, and so it could be shared out equally. Bacon, sugar and butter were among the first foods to be rationed. The government set up a special department to deal with rationing called "The Ministry Of Food" and its main purpose was to help people not to waste food. This can be illustrated in source A1. It is a primary source, and is a pamphlet made by The Ministry Of Food. It informs people about the reasons why they should ration. These reasons were:- * Rationing prevents waste of food. * Rationing increases our war effort. * Rationing divides supplies equally. * Rationing prevents uncertainty. This source has both good points and bad points. It is very reliable, because it was produced by the government and is purely information. ...read more.

It is a useful source because it is informative about what processes occurred during an evacuation process, and is reliable because it was made by the government. However, it is not useful for finding out the effects evacuation had to people because it doesn't tell you how people felt and whether or not the leaflet was effective or not. Bombing was another factor which effected people during World War II. The government knew that cities were going to be bombed, and also knew that gas could also be used. Gas was a weapon which could be dropped from aeroplanes. There were several types of gas, all poisonous. When people breathed the gas in, they would die, coughing and spluttering. Bombs were dropped all over Britain, including Wales. In total, 985 people in Wales died, and 1221 were seriously injured. Swansea and Cardiff were the worse effected places because they had a large population and were by the coast. A source which illustrates the effect bombing had on people is source B5, which is an eyewitness account from a 5 and a half year old girl. She tells the interviewer what happened when her house was hit by a bomb. The source is useful because this person was there when it happened, is informative and it tells us how the family was effected. However, the source is also weak because it is recalled, which means that the person could exaggerate or miss some key points that happened, and because this is 1 view, we don't know how widespread the bombings were. ...read more.

A source that illustrates Dig For Victory is source C8, a government poster informing people about Dig For Victory. The source is useful because it shows the tactics and ideas the government used to encourage people to help win the war. However, the source doesn't show us how widespread Dig For Victory was around Britain. It doesn't show us how people were effected by the Dig For Victory campaigns, and it doesn't give us any information. Conclusion World War II made a huge impact on the lives of people in Britain. The risk of air raids, bombing and ground attacks meant that many poeple were scared, and stayed in their air shelters in case of an attack. The risk of air attacks meant that imports and exports to and from Britain were slowed down, and people's diets changed. Most weekly meals were monotonous, and dull. Food like wheat, bananas and oranges were unable to be imported into Britain. This was very hard on people, because rationing meant that meals were smaller, and women had to cook with very little. Women were allowed to do mens jobs, such as factory workers and ambulance drivers. The jobs the women did meant that the men could go and fight. Most women worked in munitions factories, or arsenals. There were many munitions factories in Wales, and people from all over went to work in them. This was good for local ecomony, and unemployment went down. In 1945, on November 11th, the war was over. The bombing of German cities meant that Hitler commited suicide, and the Nazi party collapsed. After six years of fighting, Europe was finally at peace. ...read more.

This is a well organised and logically structured essay/revision aid. It is a thorough and detailed attempt to answer the question and it also repeatedly analyses the effectiveness of the primary sources used. Shows evidence of individual research and intelligent summarising.