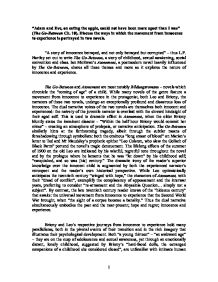 "Adam and Eve, on eating the apple, could not have been more upset than I was" (The Go-Between Ch. 10). Discuss the ways in which the movement from innocence to experience is portrayed in two novels. "A story of innocence betrayed, and not only betrayed but corrupted" - thus L.P. Hartley set out to write The Go-Between, a story of childhood, sexual awakening, social convention and class. Ian McEwan's Atonement, a postmodern novel heavily influenced by The Go-Between, shares all these themes and more as it explores the nature of innocence and experience. The Go-Between and Atonement are most notably Bildungsromans - novels which chronicle the "coming of age" of a child. While many novels of the genre feature a movement from innocence to experience in the protagonist, both Leo and Briony, the narrators of these two novels, undergo an exceptionally profound and disastrous loss of innocence. The dual narrative voices of the two novels are themselves both innocent and experienced: the naivety of the juvenile narrator is overlaid with the shrewd hindsight of their aged self. This is used to dramatic effect in Atonement, when the older Briony bluntly states the imminent disaster - "Within the half hour Briony would commit her crime" - creating an atmosphere of prolepsis, or narrative anticipation. The Go-Between similarly hints at the forthcoming tragedy, albeit through the subtler means of foreshadowing through symbolism: both the ominous "long smear of blood" on Marian's letter to Ted and Mr Maudsley's prophetic epithet "Leo Colston, who slew the Goliath of Black Farm" portend the novel's tragic denouement. The lifelong effects of the summer of 1900 on the old Leo are indicated by his wistful, regretful tone throughout the novel ...read more.

Briony and Leo's misconceptions, false expectations and ignorance of sex - "like a physical defect" - are due in part to religion, and thus society's negative depiction of sexual experience (symbolised in the titular quotation by the apple from the tree of knowledge) as synonymous with sin. This automatic fear of knowledge, experience and sex, inherent in original sin, is evident in Leo's reaction to the Belladonna, which through its name and form indicates temptation - "It looked the picture of evil and also the picture of health... I knew that every part of it was poisonous, I knew too that it was beautiful". Just as Leo is tempted by knowledge, Briony too seeks the ultimate knowledge and power of the novelist, a concept demonstrated extensively by Atonement's omniscient narrator (ultimately Briony herself) and stream of consciousness style. "In a story you only had to wish, you only had to write it down and you could have the world." Briony finds this neatness of novel writing preferable to the chaos - "the messiness of other minds" - inherent in play writing. However, while the solipsistic power and knowledge of the omniscient narrator appeals to Briony, she is at age thirteen "not worthy of it. She could never forgive Robbie his disgusting mind." Although Briony desires the ultimate knowledge of the novelist, her innocence (or perhaps more accurately, ignorance) prevents her from obtaining it: for while her ill-informed notions of sex prevent her from forgiving Robbie, she cannot understand him, and thus the omniscience she seeks is denied. Only at age seventy-seven, with a lifetime of experience and knowledge, is she worthy of the novelist's power, with which she can finally give Cecilia and Robbie ...read more.

A feminist reading would suggest that McEwan, with the perspective of a twenty-first century writer, rejoices in the breaking of convention and in Cecilia's emancipation from the sexual limitations of women. McEwan's sympathetic portrayal of Cecilia and Robbie as the "romantic heroes" strengthens this argument, in sharp contrast with Hartley's portrayal and judgment of Marian, altogether a more morally ambiguous character. Her two symbolic representations, the Virgin of the Zodiac and the Belladonna, reveal the expectations of the virgin-whore dichotomy to which women were subjected: either remain chaste and innocent, or become a "fallen woman"; Eve the sinner; "beautiful" but "poisonous". Whether due to the conservatism of the fifties (and therefore Hartley) or of 1900, it could be argued that through portraying Marian as "the chief offender", Hartley, who "thought that Marian behaved very badly and Ted only less badly", does not challenge the system of female and sexual suppression. However, upon closer inspection it is clear that Marian's culpability is primarily due to her manipulation of an innocent child, not her sexual freedom. As Leo forlornly reflects, "everything she had done for me had been done with an ulterior motive". Tragically however, it occurs to him too late that the adults, in their manipulation and neglect, "had treated me badly", and so Leo bears the full burden of guilt, never realising that "there was something wrong with the system" that had so blinded him. Thus in the movement from innocence to experience, it is the former, not the latter, that is culpable for the tragedy in the two novels. Experience did not corrupt innocence; the culture of suppression, of imposed ignorance masquerading as innocence, demonized experience: and so our protagonists, "on eating the apple" of knowledge, fall from Eden. ?? ?? ?? ?? 1 ...read more.

***** 5 Stars
This is an outstanding essay and very difficult to find any area which can be improved. Beautifully written, logically structured, excellent selection of embedded quotes to support comments, inclusion of necessary social and historical contextual factors, quotes from author. Great conclusion. This is a compelling and thoughful essay which makes insightful and perceptive comments. Outstanding.