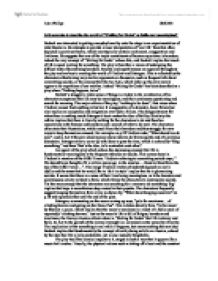 Is it accurate to describe the world of 'Waiting for Godot' as futile and meaningless? Beckett was interested in putting everyday banality onto the stage in an experimentation of what theatre is. He attempts to provide a truer interpretation of 'real life' than that often depicted in previous theatre, which may typically contain excitement, exaggeration and liveliness. He suggests that one of the major constituents of human experience is boredom, indeed the very concept of 'Waiting for Godot' echoes this, and Beckett implies that much of life is spent waiting for something. The play is therefore a means of undergoing the difficult task of dramatising boredom. Routine and repetitiveness are apparent throughout the play and are key to creating the world of Vladimir and Estragon. This is reflected by the characters often having very similar arguments or discussion, such as frequent talk about committing suicide; or the concept that the two Acts, which make up the play merely appear to be repetitions of one another. Indeed 'Waiting for Godot' has been described as a play where "Nothing happens, twice". Beckett's struggle to make sense of things is evident in the combination of his characters acceptance that life may be meaningless, and their continuous questioning and search for meaning. The major refrain of the play, "nothing to be done", first arises when Vladimir cannot find anything in his hat. ...read more.

In Act II, the growth of the leaves overnight is a comment on the unreality of reality. The implication is that something is real while it happens, but means nothing the next day. Beckett implies that fundamentally the concept of reality being solid is an illusion, echoed by the idea that life is very predictable, yet is also instantly forgettable. The play itself has comical aspects to it, staged in such a way that it appears like a music-hall routine. Visually, the physical actions such as taking off a boot and the constant bickering between Vladimir and Estragon provide the same tone and mood as pantomime would. This may have its roots in films featuring Charlie Chaplin and Laurel and Hardy. Beckett seems to create a rhythm through the pair's routine of bickering, then having a row followed by reconciliation, and a comic deflation alongside. The comical nature creates a stark contrast with the essentially melancholy undertone of the play and some of its depressing themes. A discussion between the two characters that hanging themselves will provide 'an erection' creates the humorous idea that they will even contemplate death for sensation of some sort. Beckett plays on the concept that people want excitement in their lives by implying that the only excitement they can find comes in death. The surreal and wholly unexplained circumstances surrounding the characters provide the audience with an absurd world of which they understand little. ...read more.

The characters self-conscious struggle to do something, echoed by "that wasn't such a bad canter", in Act II shows that they are ironically aware of the futility of conversation, but also know that they need it. Beckett's world is one of loneliness, where even the Gestapo-like figure of Pozzo craves company as he states in Act I, "I am happy to have met you... Yes, the road seems long when one journeys all alone...". Vladimir and Estragon are tramps and thus reflect humanity stripped down to its essential assets. They have infinite time and space to reflect as they have little else to do. While Beckett depicts the characters in such a way that they appear to be frequently joking around, he implies that this is actually a serious survival tactic. This leads to the idea that friendship is fundamental for people to deal with the harshness of life and its nonsensicality at a time where people have become less religious. The literal concept of 'waiting for Godot' is important in creating meaning in Beckett's world. In Act II Estragon says, "We always find something, eh Didi, to give us the impression we exist?" this echoes Beckett's use of 'Godot' as a metaphor for something that we all need - a search to give people a sense of narrative and purpose. The sense of meaning that comes in humanity's reluctance to give in, contrasts with the concept that it is a repetitive and inescapable routine. ?? ?? ?? ?? Alex Phillips 28/02/05 ...read more.