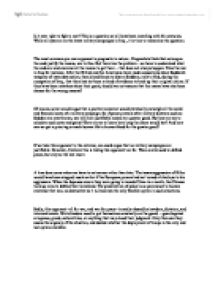 Is it ever right to fight a war?

Is it ever right to fight a war? This is a question we all have been wrestling with for centuries. While all eyes are on the latest military campaigns in Iraq , it is time to reexamine the question. The most common pro-war argument is pragmatic in nature . Pragmatists think that as long as the ends justify the means, war is fine. But there lies the problem - we have to understand what the ends are and examine all the means to get there -- that does not always happen. Take the war in Iraq for instance. After the British and the Americans have made accusations about Saddam's weapons of mass destruction, they joined forces to disarm Saddam, only to find, during the occupation of Iraq , that there has not been a shred of evidence to back up their original claims. ...read more.

So if peace prevails after military dictators such as Saddam are overthrown, war will be a justifiable means to a greater good. But how are we to calculate such costs and gains? How are we to know how long the chaos would last? And how can we put a price tag on each human life to be sacrificed for the greater good? If we take this argument to the extreme, we could argue that no military campaigns are justifiable. However, I believe this is taking the argument too far. Wars can be used to defend peace, but only as the last resort. A time does come when we have to act sooner rather than later. ...read more.

World leaders need to put themselves constantly on the guard -- guard against arrogance, greed, cultural bias, or anything that may cloud their judgment. Only then can they assess the urgency of the situation, and decide whether the deployment of troops is the only and last option available. The Chinese character "mo" perhaps embodies what warfare should be all about: a way to end fighting. Even a military sage like Sun Tze warns us of the dangers of warfare: "Laying siege to a city is only done when other options are not available." Here is a motto we all should follow. ???????,??????????? Is it ever right for a country to fight a war,Write an essay on this topic,stating your opinion and supporting it with at least three reasons. To fight or not to fight, that is the question ...read more.