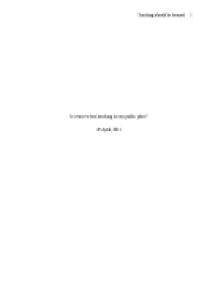 Is it time to ban smoking in any public place?

﻿Smoking should be banned Is it time to ban smoking in any public place? 4th April, 2011 ________________ Smoking is a dirty and unhealthy habit. It causes detriment to the body of a person. People smoke for all sorts of reasons: to help them relax, to improve concentration or even just to relax with friends on an occasional basis. If one was to envision a family out to dinner in a restaurant, celebrating their daughter?s birthday and all of a sudden their night became unpleasant because of the smoke from the cigarette that is constantly coming from the table on the side of them as a result, forcing them to leave. Everyone has the right to unpolluted or clean air. The first smoking ban transpired in 1590, by Pope Urban VII, who banned individuals for smoking or chewing tobacco near a church (Smoking Ban - Obstruction of Freedom?). Problems linked with tobacco use did hit the public?s eye till the twentieth century. Smoking should be banned in public because it exposes non smokers to the dangers of second hand smoking; it persuades the minds of teens and the government can tremendously benefit if they place serious taxes on smokers. Firstly, smoking exposes non-smokers to secondhand smoke. Secondhand smoke or passive smoke is the unintentional inhalation of smoke which occurs when tobacco diffuses into an environment and inhaled by people within that setting (Bing Dictionary). There are two forms of secondhand smoke; sidestream smoke (smoke which is inhaled from the tip of a cigar or cigarette) ...read more.

Furthermore, diseases such as asthma and ear infections are further seen in children who reside with smokers. By banning smoking in public places and providing teens with the pros and cons of smoking, can deter them and also save lives by reducing respiratory and cardiovascular diseases such as asthma, hypertension, emphysema, lung cancer, and even death. Teen smoking forfeits any career sport that a child may want to pursue; the tar that is found in the cigarettes covers up the alveoli (found in the lungs) which assist in breathing. The tar prevents a large surface area to be formed in the lungs which would lower the child?s endurance, making them tired faster and have difficulty breathing. Smoking also affects the teen?s body image: it darkens their lips, gives them dirty, beige teeth, it gives them a bad breath or smoker?s breath, and also it makes an individual to spend more money. If an individual smokes a pack of cigarette cost daily; this cost about five dollars; at the end of the week that?s thirty five dollars and at the end of the year that?s about twelve hundred dollars which could?ve been spent on something better (Reasons not to smoke). Teens who smoke argue that, they are only smoking for right now because their friends are doing it and it helps to calm their nerves and relieve stress. They claim as they get older eventually, it will stop. That is not the case. ...read more.

Smoking is unclean and unhealthy; it would not affect only the smoker but also the person who inhales those fumes. On the other hand, smoking in public places should be banned because it sends a negative image to teens in The Bahamas. Because some teenagers see adults doing it, they may feel the need to do it too. Is that the message the government wants to send out to our teens? All of these points need to be taken into consideration. Banning smoking would not only reduce the chances of non smokers getting ill but it would also save lives amongst the smokers themselves. ________________ Reference Ban Smoking in Public Places. (2011, February 5). The Freeport News . Bing Dictionary. (n.d.). Retrieved April 2, 2011, from Bing: http://www.bing.com/Dictionary/search?q=define+secondhand+smoke&qpvt=define+secondhand+smoke&FORM=DTPDIA Consumers fight back over inhaling 'passive smoke' before exhaling . (2003, July 24). The Nassau Guardian . Learn About Cancer. (2011, September 11). Retrieved March 30, 2011, from American Cancer Society: http://www.cancer.org/cancer/cancercauses/tobaccocancer/secondhand-smoke Miller, T. (2010, February 9). How to Persuade Children Not to Begin Smoking. Retrieved March 29, 2011, from Livestrong.com: http://www.livestrong.com/article/223266-how-to-persuade-children-not-to-begin-smoking/ Raising Cigarette Taxing reduces smoking especially amongst kids. (n.d.). Retrieved March 31, 2011, from Campaign for Tobacco-free Kids: http://www.tobaccofreekids.org/research/factsheets/pdf/0146.pdf Reasons not to smoke. (n.d.). Retrieved March 30, 2011, from angelfire.com: How to Persuade Children Not to Begin Smoking Rutherford, T. (2005, December 5). Quitting a habit that won't quit you. The Nassau Guardian . Schneider, M.-J. (n.d.). Introduction to Public Health. Retrieved March 30, 2011, from Google Books: http://books.google.bs/ Smoking Ban - Obstruction of Freedom? (n.d.). Retrieved March 29, 2011, from nottosmoke.com: http://www.notosmoke.com/herbal-smoking-articles/public-smoking-ban.htm ...read more.