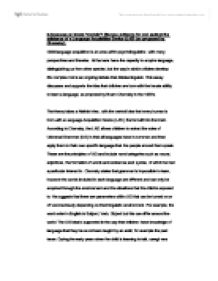 Is language an innate module?

Is language an innate 'module'? Discuss evidence for and against the existence of a Language Acquisition Device (LAD) (as proposed by Chomsky). Child language acquisition is an area within psycholinguistics with many perspectives and theories. All humans have the capacity to acquire language, distinguishing us from other species, but the way in which children develop this complex tool is an ongoing debate that divides linguists. This essay discusses and supports the idea that children are born with the innate ability to learn a language, as proposed by Noam Chomsky in the 1950's. The theory takes a Nativist view, with the central idea that every human is born with a Language Acquisition Device (LAD) that is built into the brain. According to Chomsky, the LAD allows children to extract the rules of Universal Grammar (UG) in that all languages have in common and then apply them to their own specific language that the people around them speak. These are the principles of UG and include word categories such as nouns, adjectives, the formation of words and sentences and syntax, of which he had a particular interest in. Chomsky states that grammar is impossible to learn, however the words included in each language are different and can only be acquired through the environment and the situations that the child is exposed to. He suggests that there are parameters within UG that can be turned on or off unconsciously depending on their linguistic environment. ...read more.

People grasp the same basic linguistic level despite other factors such as upbringing. The way in which animals communicate supports Chomsky's viewpoint in that they possess a level of intelligence yet can't use language in a sophisticated way as humans do, they don't have the LAD required to do so, only humans universally use language. This may just be a result of animals not having the physical features that are needed to produce speech. The errors that a child makes during the early years also prove that language is an innate ability. They may overextend a grammatical rule such as adding the inflection "-ed" to any word that is in the past tense. If corrected by an adult for their grammatical error, children appear unconcerned, whereas if they were learning language from their parents they would be. This shows that language is an innate ability as they will not have imitated incorrect grammar from an adult, it is a systematic error. The Critical Period hypothesis (Penfield, 1959) is an argument against Chomsky. It suggests that there is a crucial period in which language can be acquired normally. The crucial period to acquire language ends at the age of twelve. The plasticity of the brain is an important factor as this is how flexible the brain is in acquiring new functions. After the child turns twelve, the brain loses some of this plasticity so it is more difficult to learn language. ...read more.

For example, Broca's area is in the brain's left hemisphere, with its function linked to the production of speech The ease and speed that a child acquires language is also an argument that can be used against Chomsky. A young child will be exposed to language every day, therefore it will be much easier for them to acquire a new language than an older person learning a new language. As Chomsky suggests the UG idea, David Crystal (2004) stated that past tenses and prepositions vary between different languages, which would make the idea of UG less reliable. He points out that all languages around the world have nouns and vowels, supporting the theory of a similar grammar system worldwide. This essay has examined the way in which children acquire language and theories surrounding the debate. It has shown how there is strong evidence that we are born with the ability to communicate through language. As the essay shows, acquiring speech is a complex process that appears to be grasped with ease by children due to a Language Acquisition Device that every human is born with. However, it is likely that it is not just biological factors that determine our ability to speak. Environmental factors are likely to play a role in language acquisition, in that children need to gain life experience so they can use their everyday knowledge to talk. The Nature Vs Nurture debate regarding language acquisition is one that has been long debated and it is most likely that both our genetics and the environment contribute to our ability to acquire language. ...read more.

This is a thoughtful and well structured essay which logically discusses and explores Chomsky's theory and theories which contradict and support it. Some case studies and examples are given and explanations are usually simple but detailed showing an understanding of main topic and concepts.