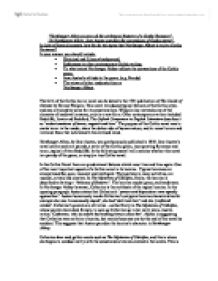 "Northanger Abbey possess all the archetypal features of a Gothic Romance". "In Northanger Abbey, Jane Austen parodies the conventions of Gothic terror". In light of these comments, how far do you agree that Northanger Abbey is truly a Gothic Romance? In your answer you should include: * Historical and Literary background. * References to other contemporary Gothic writing. * To what extent Northanger Abbey reflects the conventions of the Gothic genre. * Jane Austen's attitude to the genre. (e.g. Parody) * The views of other readers/critics on Northanger Abbey. The birth of the Gothic horror novel can be dated to the 1764 publication of The Castle of Otranto by Horace Walpole. This novel introduced typical features of the Gothic style, and was criticised by some for its sensationalism. Walpole also revived some of the elements of medieval romance, only in a new form. Other contemporary writers included Radcliffe, Lewis and Beckford. The Oxford Companion to English Literature describes it as 'violent emotions of terror, anguish and love'. The purpose of the Gothic novel was to evoke terror in the reader, show the darker side of human nature, and to reveal terrors and irrational fears that lurk beneath the civilised mind. Northanger Abbey, by Jane Austen, was posthumously published in 1818. Jane Austen's novel can be seen as a parody, a satire of the Gothic genre, incorporating Romance and terror, typical of Ann Radcliffe. In the following essay I will examine whether this novel is a parody of the genre, or simply a true Gothic novel. In the Gothic Novel there are predominant features which recur time and time again. ...read more.

Some readers see Henry is seen as a male protagonist who is forever trying to educate Catherine, and he often patronises her as well, such as his mocking gothic story 'your lamp suddenly expires in the socket', to which Catherine becomes quite excited and emotive 'Oh! No, no'. This puts Henry in a more unfavourable light, suggesting his heroic qualities are not abundant, and that he takes a slight pleasure in belittling Catherine at times. Northanger Abbey also makes use of villains, another typical feature of Gothic Romance. Catherine is pursued by villains - although unlike Ambrosio in Matthew Lewis', The Monk, who commits acts of rape and murder, the villains in Northanger Abbey have more humane failings - materialism, rudeness and arrogance, rather than the evil menacing villains of The Monk, and The Mysteries of Udolpho. John Thorpe does not exude the sexual magnetism of many villains such as Ambrosio in The Monk, who Mathilda is infatuated with. He is clumsy and idiotic. 'fidgeted about'. He even makes a bumbling attempt to propose to Catherine, to which she is oblivious. He does however try to thwart Catherine's plans, from lying about the Tilney's to almost forcing Catherine to change her plans. 'How could you tell me they were gone?' General Tilney also lacks the sexual magnetism and upon meeting him the reader is not aware of an evil dark nature, more a harsh materialistic nature. Catherine fantasises about what evil deeds he may have done, but the reader can clearly see that this is Austen mocking Catherine's na�ve nature. General Tilney banishes Catherine towards the end of the story mysteriously - to Catherine's horror, 'her grief and agitation were excessive'. ...read more.

The language is often much more rational than most Gothic novels, which can be melodramatic, such as in The Castle of Otranto: 'in a frantic manner, his eyes staring, and foaming at the mouth' and this shows that Northanger Abbey is a much more rational realistic novel. Indeed Jane Austen often asserts her opinion through the language, and what she thinks of the Gothic genre. 'it was not in them perhaps that human nature, at least in the midland counties of England was to be looked for'. This adds to the parody, and shows that Austen finds the genre ridiculous. I think Jane Austen didn't want to write a Gothic Romance, but rather a novel which deals with Gothic literature, and parody what she though was a ridiculous genre. I also think she wanted to defend the novel, 'the liveliest effusions of wit and humour are conveyed to the world in the best chosen language'. Austen perhaps included this to show that all novels are not implausible sensationalist tales. Some critics have suggested that Henry Tilney represents the voice of Jane Austen as he too defends the novel, 'who has not pleasure in a good novel, must be intolerably stupid'. Although primarily a parody of Gothic Romance, some critics also state it is a story of the heroine Catherine's transition from a na�ve, fantasising young girl, into a more mature, perceptive and down to earth woman. I wholly agree, as the reader can clearly see the transition period from the start of her stay at Northanger Abbey, to the end of the novel. In conclusion, I think that Northanger Abbey is not a true Gothic Romance, although it incorporates many features and stylistic devices, these are for the purpose of parody; not drama. ...read more.