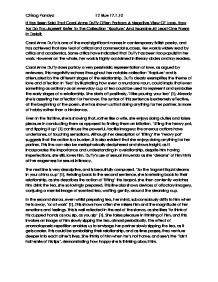 It Has Been Said That Carol Anne Duffy Often Portrays A Negative View Of Love. How Far Do You Agree? Refer To The Collection Rapture And Examine At Least One Poem In Detail:

It Has Been Said That Carol Anne Duffy Often Portrays A Negative View Of Love. How Far Do You Agree? Refer To The Collection 'Rapture' And Examine At Least One Poem In Detail: Carol Anne Duffy is one of the most significant names in contemporary British poetry, and has achieved that rare feat of critical and commercial success. Her work is widely read by critics and academics. Some critics have indicated that Duffy has been too populist in her work. However on the whole, her work is highly acclaimed in literary circles and lay readers. Carol Anne Duffy does portray a very pessimistic representation of love, as argued by reviewers. This negativity echoes throughout her notable collection 'Rapture' and is attenuated by the different stages of the relationship. Duffy clearly exemplifies the theme of love and affection in 'Tea' by illustrating how even a mundane noun, could imply that even something as ordinary as an everyday cup of tea could be used to represent and symbolise the early stages of a relationship. She starts off positively, 'I like pouring your tea' [1]. Already she is asserting her affection for her lover. ...read more.

The effect of onomatopoeic repetition enables us to envisage her partner slowly sipping the tea, as it gets cooler. This could be symbolising their relationship, and as time passes, they venture deeper into each other's lives. She thinks of him when he's not home, and see's the 'faint half-smile of his lips', demonstrating how happy she is thinking about him. In the following stanza, she shows how much she enjoys making his tea for him, by religiously asking, what he'd like in his tea, '-sugar? - milk?'. She does seem very deeply involved with her partner, and she's looking forward in the relationship, although it has not been a long time since they've been involved. This is explicitly shown when she admits she does not know some of 'the answers I don't know by heart, yet'. It is shown effectively as the word 'yet' is in juxtaposition with the comma, just before it, to magnify its importance, showing us that she also expects the relationship to last. She forgets whenever she asks him for 'sugar' or 'milk', as she sees his 'soul in his eyes' [1]. ...read more.

I enjoyed reading this poem, and liked the way Duffy expertly shows the theme of love, from even ordinary tea. The poem is very interesting and it flows, rather like tea, which is why the title is significant, as it relates back to the structure of the poem, and how easily the poem ebbs. As the poem continues, the sentences get longer and more fluid, implying when her partner is at home, she feels more at ease and relaxed. The stanza's are very rich in description and invoke tropics from eastern China, transporting your mind to exotic locations, incorporating a myriad of effective literary devices. I think Carol Anne Duffy does often portray a negative view of love; it permeates the collection of 'Rapture', and is mirrored in 'Mean Time'. Her representation of love shows themes of depictions of reality, isolation and unconditional love, which all have resounding concepts of negativity. Many critics have accused Duffy of being too harsh in her realism of her poetry, one, Rees-Jones, commented on Duffy's work, to admit her poetry is 'highly acclaimed'[2] for her outstanding skill, but the work is 'an impulse towards realism'[2], showing that construction of the themes mainly comprise of sincerity and realistic love. To achieve this sense of realism often brings about pessimism, which Duffy infuses within her work. ...read more.