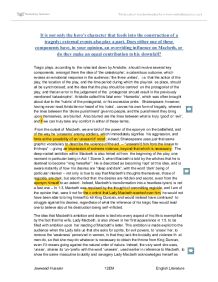 It is not only the heros character that feeds into the construction of a tragedy; external events also play a part. Does either one of these components have, in your opinion, an overriding influence on Macbeth, or do they make an equal contr

It is not only the hero's character that feeds into the construction of a tragedy; external events also play a part. Does either one of these components have, in your opinion, an overriding influence on Macbeth, or do they make an equal contribution to his downfall? Tragic plays, according to the rules laid down by Aristotle, should involve several key components; amongst them the idea of 'the catastrophe', a calamitous outcome, which evokes an emotional response in the audience; 'the three unities', i.e. that the action of the play, the location of the play, and the time period during which the play takes place, should all be synchronised; and the idea that the play should be centred on the protagonist of the play, and that an error in the judgement of the protagonist should result in the previously mentioned 'catastrophe'. Aristotle called this fatal error 'Hamartia', which was often brought about due to the 'hubris' of the protagonist, or his excessive pride. Shakespeare, however, having never read Aristotle nor heard of his 'rules', carves his own form of tragedy, wherein the lines between the 'divine punishment' given to people, and the punishment they bring upon themselves, are blurred. ...read more.

This ambition is made explicit to the audience when the Lady tells us that she asks for spirits, for evil powers, to 'unsex' her, to remove the 'weakness' perceived in women, in that they lack the brutality and violence that men do, so that she may do whatever is necessary to obtain the throne from King Duncan, even if it means going against the natural order of nature. Indeed, the very word she uses, 'unsex', shares its 'un-'prefix with the word 'unseam', used earlier in reference to Macbeth, to show the same masculine brutality and savagery Lady Macbeth acknowledges herself as lacking. Alternatively, her asking to be 'unsexed' could be an attempt at declaring her desire to change her actual bodily functions, with the statement. The mere fact that a woman should possess such power over a man was unheard of in the Jacobean era, and that the man in question should be in such a high position of power would be an unthinkable notion, which creates an interesting case in terms of the plays status as a tragedy; Macbeth's high status as the Thane of Cawdor makes him an ideal protagonist, while also serving as a means by which to grip the audience through the dominating role of his wife in the relationship; a dominating nature which ...read more.

certain mannerisms he possesses, an example of such being that in 1:1, the witches state that 'fair is foul, and foul is fair', a chiasmus which, at first, gives the impression of a spell being cast, but when Macbeth echoes the sentiment in 1:3, by saying he "has not seen" so "fair and foul a day", this seems to suggest that Macbeth is already under the influence of the witches, however subtly, when we are first introduced to him. The power of the Witches over Macbeth, and his relative powerlessness is made clear very early on in the play, with Macbeth being unable to respond to them in any way when they initially 'hail' him, leading to his having to be brought back to attention by Banquo, who asks him 'Good sir, why do you start and seem to fear', a statement which creates a certain amount of dramatic irony in the sense that the Witches are not 'starting' anything, they are merely giving Macbeth the push he needed to act on his murderous, regicidal desires. Following this, he attempts to order the Witches to continue in their telling of his future, saying "...speak, I charge you", yet, instead of sounding like a command given by someone in a position of authority, the 'charge' sounds hollow, and untrue. ...read more.

A generally well-structured essay which tackles the question effectively and guides the reader through the argument. The writer shows the ability to comment perceptively on the play as a whole, and on the effects of individual words and phrases.
Some of the comments require clearer expression or more careful consideration. Sometimes reading an essay aloud will help the writer to pick up on and clarify dubious points.
****