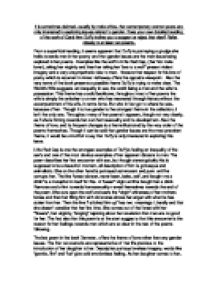 It is sometimes claimed, usually by male critics, that contemporary women poets are only interested in exploring issues related to gender. Does your own detailed reading of the work of Carol Ann Duffy incline you to support or reject that view? Refer clos

It is sometimes claimed, usually by male critics, that contemporary women poets are only interested in exploring issues related to gender. Does your own detailed reading of the work of Carol Ann Duffy incline you to support or reject that view? Refer closely to at least two poems. From a superficial reading, it seems apparent that Duffy is portraying a grudge she holds towards men in her poetry and that gender issues are the main issue being explored in her poems. Examples like the wolf in Little Red Cap, (her first male lover), taking her virginity and then her taking her "axe to a wolf" present violent imagery and a very unsympathetic view to men. However her respect for his lore of poetry which is recurrent in Anna Hathaway offers the opposite viewpoint. Also the very name of the book presents a possible theme Duffy is trying to make clear. ...read more.

Little Red Cap is one the strongest examples of Duffy's feeling on inequality of the sex's and one of the most obvious examples of her apparent distaste to men. The poem describes her first encounter with sex, but though stereotypically this is supposed to be a beautiful moment, all description of him is grotesque and animalistic. She on the other hand is portrayed as innocent and pure until he corrupts her. The line "sweet sixteen, never been, babe, waif, and bought me a drink" is a metaphor in itself for this. A "sweet" virgin until he bought her a drink. Remorse and a hint towards homosexuality reveal themselves towards the end of the poem. She cuts open the wolf and see's the "virgin" whiteness of her mothers bones and then her filling him with old stones shows her anger with what he has stolen from her. ...read more.

The "new moon" could be a new sympathetic viewpoint on men. The World's Wife has been criticised of being men hating and gender bias. However the theme that is actually being discussed has been cleverly disguised. The poem is a literary representation of Duff's pregnancy and the feelings thoughts and decisions which occurred during. Little Red Cap is her first encounter with men in the book, stealing her virginity, but also starting her pregnancy. The poems from then on for example Mrs Sysyphus give very negative viewpoints on men, however this is because of the perceived ailment that pregnancy is to her. She doesn't yet understand the gift she has been given. It is only till the last line of the last poem that she truly understands what she has been given. That the stress, the differences and the arguments of being with a man are worth it, because it achieves the ultimate gift of children. ...read more.