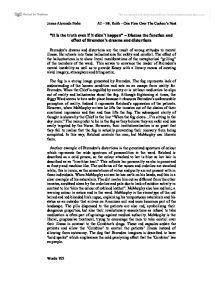 &quot;It's the truth even if it didn't happen&quot; - Discuss the function and effect of Bromden's dreams and distortions.

"It is the truth even if it didn't happen" - Discuss the function and effect of Bromden's dreams and distortions Bromden's dreams and distortions are the result of wrong attitudes to mental illness. He retreats into these hallucinations for safety and comfort. The effect of the hallucinations is to show literal manifestations of the metaphorical "grilling" of the members of the ward. This serves to convince the reader of Bromden's mental instability as well as to provide Kesey with a literary means of creating vivid imagery, atmosphere and biting satire. The fog is a strong image presented by Bromden. The fog represents lack of understanding of the human condition and acts as an escape from reality for Bromden. When the Chief is engulfed by anxiety or is without medication he slips out of reality and hallucinates about the fog. Although frightening at times, the foggy Ward seems to be a safer place because it obscures Bromden's unfavourable perception of reality. Indeed it represents Ratched's oppression of the patients. ...read more.

The dirt marks him out as different from the other inmates, scrubbed clean by the orderlies and pale due to lack of outdoor activity in contrast to his "skin the colour of oxblood leather". McMurphy also has red hair, a warning colour in nature and in the ward. McMurphy is the stereotype of the red haired and red-blooded Irish rogue, explaining his tempestuous naturalism and his status as an outsider that arrives on American soil and soon becomes part of the landscape. The pills dispensed to the patients are also red, symbolising their dangerous properties, but also their revolutionary associations as refusal to take medication is often part of uprisings against medical authority. McMurphy is the liberal, progressive treatment, trying to encourage the men to take control over their illness in contrast to the Combine's drugs. These red capsules sedate the patients and allow the 'Combine' to control the patients' illness instead of allowing them autonomy. The dog that Bromden imagines is described to have "cold sparks" which emphasizes the cold paralyzing effect that the 'Combine' has on people. ...read more.

To this extent "it is the truth even if it didn't happen." Bromden also imagines a "young, gangly mongrel" who is watching geese. This is a recurring image throughout the novel. The dog represents Bromden's desire to escape from the ward; although he attempts to escape it ends in presumed destruction as he "watched the dog and the car making for the same spot of pavement." Bromden sees the dog when he mentally escapes from the ward whilst receiving his treatment. The dog once again represents his freedom of the ward. Seeing the dog alive shows that escape doesn't end in death. In conclusion we see that as Mc Murphy appears on the scene and enlightens Bromden of the knowledge that he doesn't have to conform to society's ideas. After this realisation Bromden's distortions and dreams decrease in intensity and eventually disappear, as he gains confidence and individuality. Even if these hallucinations are not necessarily true, they are to Bromden, this s a key point that Kesey puts across. ?? ?? ?? ?? James Alexanda Perks A2 - Mr. Reith - One Flew Over The Cuckoo's Nest Words: 923 ...read more.