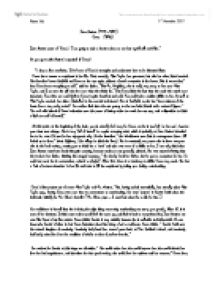 Rowen Salt 4th December 2001 Jane Austen (1775 -1817) Emma (1816) Jane Austen wrote of 'Emma'; "I am going to take a heroine whom no one but myself will much like." Do you agree with Austen's appraisal of Emma? To draw a firm conclusion, I feel some of Emma's strengths and weaknesses have to be discussed first; Emma has a vacuum or emptiness in her life. Most recently, Miss Taylor, her governess, but also her close friend married. She therefore leaves Hartfield and Emma on her own again, without a female companion in the house. But it seems that " dear Emma bears everything so well," said her father. "But Mr. Knightley, she is really very sorry to lose poor Miss Taylor, and I am sure she will miss her more than she thinks for." But Emma finds the fact that she made the match more important. From this, one could believe Emma is quite heartless and cold. You could take a sudden dislike to her. As well as Miss Taylor married, her sister (Isabella) is also married and doesn't live at Hartfield, so she has "been mistress of the house from a very early period." Her mother died when she was young, so she now lacks friends and a maternal figure; " The real evils indeed of Emma's situation were the power of having rather too much her own way, and a disposition to think a little too well of herself." ...read more.

Again, Emma is interfering, making the reader abandon all hopes of any improvement in her. But if you read on, it is quite enjoyable to see Emma get her comeuppance, as she finds out she has been encouraging Harriet's feelings for Mr. Knightley instead of Frank Churchill.Austen does realise the audience needs some form of justice! Emma finds this intolerable, as then she realises that she is in love with Mr. Knightley, as she says, "It darted through her, with the speed of an arrow, that Mr. Knightley must marry no-one but herself." One feels glad that Emma has realised her true feelings but on the other hand, it is quite amusing, even annoying, as it has taken her so long. But it is hard not to warm to Emma a little when we see how guilty she feels and thinks, "How improper had she been acting by Harriet! How inconsiderate, how indelicate, how irrational, how unfeeling had been her conduct!" She really does start to repent what she has done and we, as readers, appreciate this! Jane Austen has made Emma human! ; " With insufferable vanity had she believed herself in the secret of everybody's feelings; with unpardonable arrogance proposed to arrange everybody's destiny." When Emma realises what she has been doing, she tortures herself enough about it, but she also remembers that she has been terribly manipulated by Frank Churchill who was almost playing her at her own game. ...read more.

Knightley, her only reason why they shouldn't is that Henry would not inherit Donwell Abbey, after coming to the conclusion that "Mr. Knightley must not marry! -You would not have little Henry cut out from Donwell? -Oh! No, no,.." She actually believes that is the real reason, but we know it isn't. It is good to know that at the end of the story, she realises it was actually because she loved Mr. Knightley and it had nothing to do with Henry; "...found amusement in detecting the real cause of that violent dislike of Mr. Knightley's marrying Jane Fairfax." Readers may find it difficult to comprehend how little she understands her own feelings, yet has no trouble and spends hours imagining what others' could be. Jane Austen only offers information and the readers have to form their own judgements without her comments or opinions to persuade them whether or not to like Emma in this case. I cannot say I completely liked Emma, but towards the end of the book, I did start to warm to her a little. I think Jane Austen is right in the fact that not many people but herself will much like Emma, but then she has created her, so she is bound to like her. One would expect a writer to make a heroine someone whom she admired. I did not consider Emma to be a bad person, but I did find her rather annoying and selfish. However, she seemed to mature well in the book so I did end up liking her, which I suspect, was exactly what I was meant to do! ...read more.