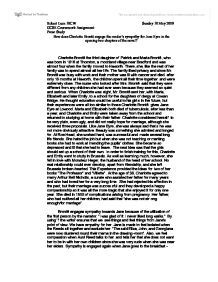 Jane Eyre. Bront engages sympathy towards Jane because of the utilization of the first person by the narrator. I was glad of it: I never liked long walks. By using I the writer ensures that we see things and feel things from Janes point

How does Charlotte Brontë engage the reader’s sympathy for Jane Eyre in the opening two chapters of the novel?

Charlotte Brontë the third daughter of Patrick and Maria Brontë, who was born in 1816 at Thornton, a moorland village near Bradford and was almost four when the family moved to Haworth. There, she, like the rest of her family was to spend almost all her life. The family liked privacy and since Mr. Brontë was busy with work and their mother was ill with cancer and died after only 18 months at Haworth, the children spent all their time together and were extremely close. The nurse who looked after Mrs. Brontë said that they were different from any children she had ever seen because they seemed so quiet and serious. When Charlotte was eight, Mr. Brontë sent her, with Maria, Elizabeth and later Emily, to a school for the daughters of clergy at Cowan Bridge. He thought education would be useful to his girls in the future, but their experiences were all too similar to those Charlotte Brontë gives Jane Eyre at Lowood. Maria and Elizabeth both died of tuberculosis, after less than a year, and Charlotte and Emily were taken away from the school and returned to studying at home with their father. Charlotte considered herself to be very plain, even ugly, and did not really hope for marriage, although she received three proposals. Like Jane Eyre, she was always sad that she was not more obviously attractive. Beauty was something she admired and longed for. At Roe Head, she worked hard, was successful and made several long life friends. She hated the job but when she was not teaching or marking books she had to work at mending the pupils’ clothes. She became so depressed and ill that she had to leave. The next idea was that the girls should set up a school of their own. In order to finish training for this, Charlotte and Emily went to study in Brussels. As well as learning much, however, she fell in love with Monsieur Heger, the husband of the head of her school. No real relationship could ever develop, apart from friendship, and she left Brussels broken-hearted. This Experience provided the ideas for two of her books “The Professor” and “Villette”. At the age of 38, Charlotte agreed to marry Arthur Bell Nicholls, a curate who assisted her father for many years and who had loved her for a very long time. She had rejected his affection in the past, but their marriage was successful and they developed a happy companionship so it was all the more tragic that she enjoyed it for only one year. She died in 1855 of complications arising from pregnancy. Her father, who had outlived all her children, had said that “she was not strong enough/for marriage”.

Brontë engages sympathy towards Jane because of the utilization of the first person by the narrator. “I was glad of it: I never liked long walks.”  By using ‘I’ the writer ensures that we see things and feel things from Jane’s point of view. We have empathy for her. Jane is made to feel isolated when the Reeds sit together and exclude her. “The said Eliza, John, and Georgiana were now clustered round their mama in the drawing-room”. Also, we feel compassion when Aunt Reed talks to her and tells her that she does not want her to be in with her own children since she was very rude when she was near her elders. Sympathy is engaged again when Jane goes to the breakfast-room alone because she was told to sit somewhere else and be silent until she could speak pleasantly. In the Breakfast room Jane finds a bookcase. Soon she was “possessed” by a volume which she made sure should be one “stored with pictures”. As she looked the book she describes the landscapes in the book are and the places where they may be found.

The reader is completely on Jane’s side when John Reed verbally and physically abuses her. “The volume was flung, it hit me, and I fell, striking my head against the door and cutting it” “I felt him grasp my hair and my shoulder”.  The reason for this is because of the brutality described. Jane tries to fight back but Miss Abbot and the nurse pull her away from John, and they hold her down. “My impulse was to rise from it like a spring; their two pairs of hands arrested me instantly.” Although John is bigger physically she still wants to attack him, because he said, she was less than a servant to him. ”Master! How is he my master? Am I a servant?” “No; you are less than a servant.” Nobody is on Jane’s side, not even the servants. They all came to rescue John Reed from Jane. Again, our sympathy for Jane is reinforced.

The sheer injustice of Jane’s circumstances gets our sympathy. Nobody accepts her version of events, even though Mrs. Reed is aware that John has been bullying Jane. “He bullied and punished me; not two or three times in the week, nor once or twice in the day, but continually.” “Every nerve I had feared him, and every morsel of flesh in my body shrank when he came near.” “…the servants did not like to offend their young master by taking my part against him and Mrs. Reed was blind and deaf in the subject: she never saw him strike or heard him abuse me…..”. Again, the reader’s sympathy is engaged when we hear that Bessie will tie Jane to a stool in the Red Room. “If you don’t sit still, you must be tied down, said Bessie.” This is a complete over-reaction. Abbot and Bessie talked about their opinions of Jane in front of her which is very rude. “And you ought not to think yourself an equality with the Misses Reed and Master Reed, because Missis kindly allows you to be brought up with them.”

Jane describes the Red Room as being very grand but cold. She also states that it is not frequented by people much because Mr. Reed had died there nine years ago. “Only the housemaid went there by herself on Saturdays, to wipe from the mirrors and furniture a week’s quiet dust: and Mrs. Reed herself, at far intervals, visited it to review the contents of a certain secret drawer in the wardrobe, where were stored divers parchments, her jewel-casket, and a miniature of her diseased husband; and in those last words lies the secret of the red-room – the spell which kept it so lonely in spite of its grandeur.” Jane’s childish imagination is engaged when she realises she has been locked into this forbidding room. She sees herself in the mirror – ghostly as she remembered Bessie’s stories about phantoms. Superstition is with Jane.

We now hear Jane’s opinion about her unfortunate situation. Our compassion is with her as we hear her side of the story. “John Reed’s violent tyrannies, all his sisters’ proud indifference, all his mother’s aversion, all the servants’ partiality, turned up in my disturbed mind like a dark deposit in a turbid well.” She talks about John’s behaviour and tells us that he has mentally affected her and this indicates that she would be more that happy to run away just for his sake. “Georgiana, who had a spoiled temper, a very acrid spite, a captious and insolent carriage, was universally indulged. “