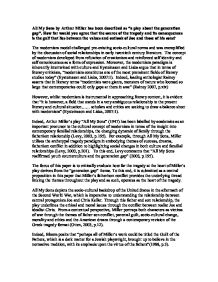 Joe Keller is a tragic hero

All My Sons by Arthur Miller has been described as "a play about the generation gap". How far would you agree that the source of the tragedy and its consequences is the gulf that lies between the values and outlook of Joe and those of his sons? The modernism model challenged pre-existing socio-cultural norms and was exemplified by the discussion of social relationships in early twentieth century literature. The concept of modernism developed from refutation of creationism and reinforced self identity and self consciousness as a form of expression. Moreover, the modernism paradigm is inherently intertwined with culture and Eysteinsson and Liska argue that in terms of literary criticism, "modernism constitutes one of the most prominent fields of literary studies today" (Eysteinsson and Liska, 2007:1). Indeed, leading anthologist Rainey asserts that in literary terms "modernists were giants, monsters of nature who loomed so large that contemporaries could only gape at them in awe" (Rainey 2007, p.xix) However, whilst modernism is instrumental in approaching literary context, it is evident that "it is however, a field that stands in a very ambiguous relationship to the present literary and cultural situation...... scholars and critics are seeking to draw a balance sheet with modernism" (Eysteinsson and Liska, 2007:1). Indeed, Arthur Miller's play "All My Sons" (1947) has been labelled by academics as an important precursor to the cultural concept of modernism in terms of the insight into contemporary familial relationships, the changing dynamic of family through the father/son relationship (Levy, 2003, p.195). For example, through All My Sons, Miller utilises the archetypal tragedy paradigm in embodying themes of success, dreams, father/son conflict in addition to highlighting social changes in both culture and familial relationships (Levy, 2003, p.201). To this end, Levy comments that "All My Sons reaffirmed youth counterculture and the generation gap" (2003, p.195). The focus of this paper is to critically evaluate how far the tragedy at the heart of Miller's play derives from the "generation gap" theme. ...read more.

However, this perception of both Joe and Willy is arguably at the crux of the generation gap that perpetuates Joe's conflict with his sons. For example, Joe comments that: "Who worked for nothin' in that war? When they work for noting', I'll work for nothin'. Did they ship a gun or a truck outa Detroit before they got their price? Is that clean? It's dollars and cents, nickels and dimes; war and peace, it's nickels and dimes, what's clean?"(Miller 125). Then repetition of questions underlines Joe's traditional beliefs regarding his role as a father under the classic American model of fatherhood, which contrasts with the decline of father's authority in post modernism. Indeed, it is submitted that Miller's depiction of the relationship between Joe and Chris provides an important insight in considering the evolution of modernism and its concomitant impact on traditional socio-cultural models. In particular, the generation gap between Chris and Joe demonstrates the intimate concept of self identity and far reaching changes in traditional social constructs regulating familial relationships. For example, Mitchelich posits that the combination of industrialisation, urbanisation and an increasingly diverse workforce culminated in a larger division of home and work life, which in turn contributed to the continuing downfall of the authoritarian father at home (Mitchelich 1969). Additionally, as regards the United States in particular, Gorer suggests that the socio-cultural development of America post Second World War propagated the decline of the role of the father, particularly as a country of immigrants: "The making of an American demanded that the father should be rejected both as a model and as a source of authority. Father never knew best.... No matter how many generations separate an American from his American ancestors, he rejects his father as authority and exemplar, and expects his sons to reject him" (1958, p.9). Accordingly, if we apply this contextually to Joe and Willy, the decline of their role as a father clearly correlates to the American backdrop of discrepancies between the immigrant father, first generation, second generation and continued generations perpetuating the father/son generational conflicts. ...read more.

Accordingly, the above analysis demonstrates that All My Sons, Miller utilises the interrelationship between the generation gap and father/son conflict to integrate the central themes in the play. This is further supported by Oikawa's observation that "the conflict between Joe and Chris is based on the basic pattern of the rebellion of a son against his father, who has become aware of his own ego" (2002, p.110). As such, Chris' rebellion is rooted in the generation gap between the concepts of family and self, which reiterates the argument that the generation gap becomes the source of tragedy in the play. This is highlighted by Weales' interpretation of the play regarding the mythical symbolism of Joe's death thus: "his death is more than a single man's punishment, for Joe Keller is a product of his society. He not only accepts the American myth of the privacy of the family, but..... Joe Keller is a self made man, an image of American success, who is destroyed when he is forced to see that image in another context - through the eyes of his idealist son" (1967, p.97). Moreover, on the one hand Joe's achievement of the American Dream becomes the essence of his obsession with traditional concepts of fatherhood and success, which is difficult to maintain in the post war socio-cultural environment. The moral and ethical conflict faced by Joe contrasts with the idealist rebellion of Chris when he accuses his father of being "an animal. No animal kills his own, what are you?"(Miller, p.116). To this end, Oikawa suggests that Miller's real intention is to use the generation gap to present the "fall of fatherhood and the demise of the Alger type "success dream" noticeable in modern American society" (2002, p.110). As a result, it is submitted that the father/son conflict culminates in the termination of the nineteenth century societal constructs pertaining to family and in particular, the relationship between family and success. This in turn becomes the crux of the ultimate tragedy in the play. ...read more.