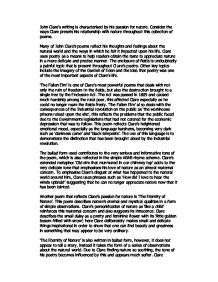 John Clare(TM)s writing is characterised by his passion for nature. Consider the ways Clare presets his relationship with nature throughout this collection of poems.

John Clare’s writing is characterised by his passion for nature. Consider the ways Clare presets his relationship with nature throughout this collection of poems.

Many of John Clare’s poems reflect his thoughts and feelings about the natural world and the ways in which he felt it impacted upon his life. Clare uses poetry as a means to help readers obtain the taste to appreciate nature in a more delicate and precise manner. The enclosure of fields is undoubtedly a painful topic that is present throughout Clare’s poetry. Other key topics include the imagery of the Garden of Eden and the idea that poetry was one of the most important aspects of Clare’s life.

‘The Fallen Elm’ is one of Clare’s most powerful poems that deals with not only the ruin of freedom in the fields, but also the destruction brought to a single tree by the Enclosure Act. The Act was passed in 1809 and caused much hardship among the rural poor, this affected Clare especially as he could no longer roam the fields freely. ‘The Fallen Elm’ also deals with the consequences of the Industrial revolution on the public as ‘the workhouse prisons raised upon the site’, this reflects the problems that the public faced due to the Governments legislations that had not catered for the economic depression that was to follow. This poem reflects Clare’s heightened emotional mood, especially as the language harshens, becoming very dark such as ‘darkness came’ and ‘black tempests’. The use of this language is to demonstrate the distinction that has been brought about by the industrial revolution.

The ballad form used contributes to the very serious and informative tone of the poem, which is also reflected in the simple ABAB rhyme scheme. Clare’s extended metaphor ‘Old elm that murmured in our chimney top’ adds to the very delicate tone that emphasises his love of nature as an almost maternal concern. To emphasise Clare’s disgust at what has happened to the natural world around him, Clare uses phrases such as ‘How did I love to hear the winds upbraid’ suggesting that he can no longer appreciate nature now that it has been tainted.

Another poem that reflects Clare’s passion for nature is ‘The Eternity of Nature’. This poem describes nature’s eternal and mystical qualities in a form of simple observations. Clare’s personification of nature as ‘like a child’ reinforces this maternal concern and also suggests its innocence. Clare describes the small daisy as a pretty and feminine flower with its ‘little golden bosom frilled with snow’; here Clare deliberately makes small and delicate things inspirational in order to show that one can find beauty and greatness in something that may appear to be very ordinary.

‘The Eternity of Nature’ is also written in ballad form, however, it does not appear to tell a story, instead it takes the form of a series of observations about the natural world. Due to Clare finding nature so soothing, the tone of his poetry becomes influenced by this and appears much softer. Clare describes nature in terms of ancient Egypt, which combines the idea of the long distant past being forgotten and the power of nature that lives on regardless. An example of this is the daisy that ‘lives and strikes its little root’ even though the carelessness of other people trample upon it.

Within ‘To be Placed at the Back of his Portrait’ Clare introduces himself as ‘Bard of the mossy cot’; therefore explicitly declaring himself as poet of the countryside, this statement alone signifies how important nature is to Clare and his poetry. The fifth line repeats the structure of the first, which is a common feature of the ballad, this is also seen within the simple ABAB rhyme scheme. The metre, on the other hand, is very irregular to that found within a typical ballad as its irregular rhythm creates a more relaxed feel.

This poem was written as a kind of obituary to be placed on the back of his portrait, which therefore creates a mournful tone to the poem. The idea of the Wren building her nest in the cowshed creates an image of renewal and enables the poem to conclude on a positive note, the final line; ‘live on for ages’ forms a consolation for Clare’s death as his immortality is gained through his work. This allows the poem to take an elegiac tone and suggest that nature will enable Clare’s spirit to live on regardless of his presence.

Clare appeared to find comfort in the ‘religion of the fields’ as he was a very timid man. This links closely to the romantic movement which Clare was considered to move on the periphery of due to its concern with returning to a more naturalistic lifestyle. Clare’s knowledge about the natural world went far beyond that of the major romantic poets, therefore making his poems much more powerful. Although romantics were religious they argued that they did not need to show this by being preached to. Clare followed this belief and often missed church on a Sunday to spend time in peace sitting in the fields nearby. Each of Clare’s poems demonstrate his strong emotion towards nature, and at times it has been argued that Clare speaks of being married to nature rather than needing a relationship in any conventional sense. The poems here show an array of emotion ranging from a celebratory tone to one of anger and melancholy. However, it cannot be argued within any of these poems that nature was not a main characteristic of Clare’s life due to the intricate detail he paid to such minute elements that would otherwise possibly not have been considered.