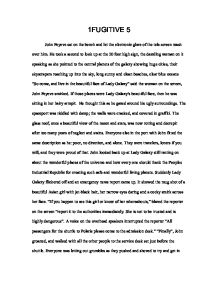 John Feyeve sat on the bench and let the electronic glare of the tele-screen wash over him. He took a second to look up at the 20 foot high sign, the dazzling woman on it speaking as she pointed to the central planets of the galaxy

1FUGITIVE 5 John Feyeve sat on the bench and let the electronic glare of the tele-screen wash over him. He took a second to look up at the 20 foot high sign, the dazzling woman on it speaking as she pointed to the central planets of the galaxy showing huge cities, their skyscrapers reaching up into the sky, long sunny and clean beaches, clear blue oceans "So come, and live in the beautiful face of Lady Galaxy" said the woman on the screen, John Feyeve smirked. If those places were Lady Galaxy's beautiful face, then he was sitting in her hairy armpit. He thought this as he gazed around his ugly surroundings. The spaceport was riddled with damp; the walls were cracked, and covered in graffiti. The glass roof, once a beautiful view of the moon and stars, was now rotting and decrepit after too many years of neglect and stains. Everyone else in the port with John fitted the same description as he: poor, no direction, and alone. They were travelers, loners if you will, and they were proud of that. John looked back up at Lady Galaxy still ranting on about the wonderful places of the universe and how every one should thank the Peoples Industrial Republic for creating such safe and wonderful living planets. Suddenly Lady Galaxy flickered off and an emergency news report came up. It showed the mug shot of a beautiful Asian girl with jet-black hair, her narrow eyes daring and a cocky smirk across her face. "If you happen to see this girl or know of her whereabouts," blared the reporter on the screen "report it to the authorities immediately. She is not to be trusted and is highly dangerous". A voice on the overhead speakers interrupted the reporter "All passengers for the shuttle to Polaris please come to the admission desk." "Finally", John groaned, and walked with all the other people to the service desk set just before the shuttle. ...read more.

Everything around John stopped. He stood there looking at the guards coming towards him; they knew he over heard the woman at the desk. John turned on the spot and ran the only thing going through his head at that moment was escape. Jade waddled through the ventilation shafts looking for the ideal place to exit. Finally she found one and jumped down from the shaft. Jade walked around the ship admiring its clean white walls and shining floors. Artwork lined the walls and friendly people smiling as they went by. Jade decided that the first thing she was going to do was have a good drink. She'd earned it after her hard days escaping. As she walked around looking for a bar, she wondered in her head how long she could stay here. As she walked through two metal bars suspended in the doors, her question was answered just as quickly as it was asked, because suddenly alarms were going off, and red lights were flashing. All eyes turned to Jade, but she was already running. "This cant be happening...I have to escape...this cant be happening" those words were the only thing going through Johns head as he raced down the dazzling corridors of the ship taking random lefts and random rights trying to evade the guards. He couldn't keep running like this, he thought to himself, he had to hide until he thought of something. Jade was running as fast as she could glancing behind her every so often to see weather she was being followed. I gotta hide someplace until I think of a plan she thought to herself. "Ah Ha!" she said as she dove into an abandoned broom closet and shut the door behind her. John looked behind him to make sure he had lost the guards then looked around for an empty room, he couldn't find one so he ran into a broom closet thinking they would never find him there. ...read more.

"Let me help you" John said as he walked over to her and put her arm around his neck. The couple hobbled into the guards quarters and through the doors on the other side. They both clambered into one of the escape pods as the door sealed shut behind them. They now sat in a tiny escape pod that looked only big enough for 4 people. "Have you got any idea how to pilot one of these?" said Jade quietly. "No," replied John, "I thought you knew how!" his voice becoming suddenly less confident, as his brain conjured images of what his body would look like when they crashed. "Figure it out quickly please." Said Jade quite calmly. "Because I now need to remove a bullet with my fingers, and nothing to ease the pain." John fumbled with the controls for a bit. This was an ESCAPE pod. It shouldn't be that hard to work! John was right, for the first time that day. For an advanced spacecraft, it was pretty amazing that the controls were limited to a big red button. He reached for the button... but hesitated. What would happen next? Where would they go? Could they help the slaves? Could they run from the Republic? Would Jade and him have a child? John gave a wild smile and looked into the air as the last image came into view. "HEY! You wanna quit daydreaming and get us off this ship already?" yelled Jade. "Oh...right...sorry" and John hit the button as hard as he could. Then tried to remember what he was thinking about. Oh yeah, he thought, I was thinking about what was going to happen when I pressed that big red button. John's eyes widened and he looked out of the window back at the mother ship that was drifting further and further away until it was alone, with its two occupants at its mercy, thinking about what they were going to do next. ...read more.