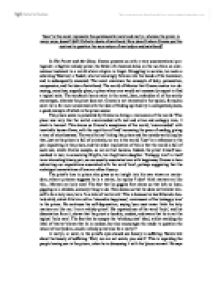 'Juan' in this novel represents the quintessential saint and martyr, whereas the priest, in many ways, doesn't fulfil Catholic ideals of sainthood. How does Graham Greene use this contrast to question the very nature of martyrdom and sainthood?

'Juan' in this novel represents the quintessential saint and martyr, whereas the priest, in many ways, doesn't fulfil Catholic ideals of sainthood. How does Graham Greene use this contrast to question the very nature of martyrdom and sainthood? In The Power and the Glory, Greene presents us with a very unconventional protagonist: a fugitive whisky priest, the father of a bastard child, on the run from an overzealous lieutenant in a world where religion is illegal. Struggling to survive, he meets a scheming 'Mestizo', a 'Judas', who he knowingly follows into the hands of the lieutenant, and is subsequently executed. The novel examines the concepts of duty, persecution, compassion, and the idea of sainthood. The world of Mexico that Greene creates is a decaying, merciless, ungodly place, a place where one would not necessarily expect to find a typical saint. The storybook heroic saint in the novel, Juan, embodies all of the saintly stereotypes, whereas the priest does not. Greene is not interested in the typical, formulaic saint: he is far more concerned with the idea of finding spirituality in unexpected places, a good example of which is the prison scene. The prison scene is presented by Greene as being a microcosm of the world: 'This place was very like the world: overcrowded with lust and crime and unhappy love, it stank to heaven'. This shows us Greene's acceptance of the world, 'overcrowded' with inevitable human flaws, with the repetition of 'and' increasing the pace of reading, giving a tone of relentlessness. The word 'crime' linking the prison and the outside world implies that, just as the prison is full of criminals, so too is the world. 'Lust' is a reference to the pair copulating in the prison, and the wider implication of this is that the world is full of such lust, which Greene accepts, as we are but humans. Indeed, the priest himself succumbed to lust, in conceiving Brigitta, his illegitimate daughter. ...read more.

In such a world, a heroic such as Juan seems ill-fitting and unrealistic: the whisky priest is a flawed, corrupted hero, for a flawed, corrupted world. This flawed hero, however, was not well-received by all of Greene's contemporaries; George Orwell wrote that Greene 'appears to share the idea, which has been floating around ever since Baudelaire, that there is something rather distingu� in being damned; Hell is a sort of high-class nightclub, entry to which is reserved for Catholics only'. Here, Orwell is trivialising the novel; the word 'floating' is rather condescending, and the use of 'distingu�' seems rather dismissive, and implies that the idea is somewhat pretentious. Mention of a 'nightclub' further trivialises the novel's message. Orwell is clearly accusing Greene of being unoriginal and pretentious, and the whisky priest as being nothing new. However, I disagree; with the direct comparisons to sainthood and martyrdom between Juan and the priest, Greene puts this 'idea' into a newer, more realistic and contemporary context. The world in which the novel takes place is one of people who doubt the priest: 'That is what everyone says all the time - you do no good... I can see them saying it all over the world'. The fact that the priest is told this 'all the time' shows that the opposition he faces is relentless, but he still does not give into despair. 'You do no good' shows that his work is viewed as futile by the population. This is reminiscent of the nihilistic view expressed by philosopher Aleister Crowley in Towards The Golden Dawn, being 'appalled by the futility of all human endeavour'. However, instead of being appalled by this futility, the priest acts in spite of it - this is where his strength lies. Whilst nihilistic attitudes permeate many layers of this Mexican society, the priest seems to be determined, strong and stoic in his outlook,. ...read more.

That even she considers him to be as such conveys Greene's message that sainthood need not be restricted to the absolutely, unattainably perfect. However, Greene seems to almost mock established ideas of sainthood when the mother says 'Of course, before we know he is a saint, there will have to be miracles...' and goes on to mention paying for relics. Such concepts seem ludicrous, given the priest's own pragmatism, yet still persist. Greene is here questioning the Catholic definition of sainthood, and is satirising it critically. Critic David Lodge wrote that 'There is a good deal of evidence, internal and external, that in Greene's fiction Catholicism is not a body of belief requiring exposition and demanding categorical assent or dissent, but a system of concepts, a source of situations, and a reservoir of symbols'. Clearly, he is supporting the notion that Greene challenges the 'categorical assent and dissent' regarding sainthood, where 'assent' represents the followings of the Catholic teachings, many of which the priest abandons. The 'assent' is embodied by Juan, and the complete 'dissent' by Jos�, giving into the 'ultimate sin, despair'. The priest lies in the middle ground, representing what V.S. Pritchett refers to as 'a whole and memorable human being'. In conclusion, Greene uses the contrast between Juan and the whisky priest to not only question, but also to criticise and challenge the idealistic Catholic views on sainthood. He uses the priest's flaws and self-doubt to present us with a character who would not be considered a traditional saint, but possesses many saintly qualities. Greene gives us the priest's ideas of sainthood, such as seeing beauty in suffering and having a sense of responsibility, with the priest's own thoughts of how he is not fulfilling them. However, Greene subtly subverts this by having sections in the novel where the priest does fulfil these self-lain expectations of sainthood, allowing the reader to make the connection and realise that the priest is actually a very dedicated and dutiful Christian, even though he himself does not realise it; his humility serves only to augment his saintliness. ...read more.