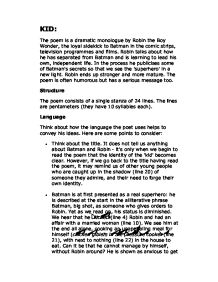 Kid - The poem is a dramatic monologue by Robin the Boy Wonder, the loyal sidekick to Batman in the comic strips, television programmes and films.

KID: The poem is a dramatic monologue by Robin the Boy Wonder, the loyal sidekick to Batman in the comic strips, television programmes and films. Robin talks about how he has separated from Batman and is learning to lead his own, independent life. In the process he publicises some of Batman's secrets so that we see the 'superhero' in a new light. Robin ends up stronger and more mature. The poem is often humorous but has a serious message too. Structure The poem consists of a single stanza of 24 lines. The lines are pentameters (they have 10 syllables each). Language Think about how the language the poet uses helps to convey his ideas. Here are some points to consider: * Think about the title. It does not tell us anything about Batman and Robin - it's only when we begin to read the poem that the identity of the 'kid' becomes clear. However, if we go back to the title having read the poem, it may remind us of other young people who are caught up in the shadow (line 20) of someone they admire, and their need to forge their own identity. * Batman is at first presented as a real superhero: he is described at the start in the alliterative phrase Batman, big shot, as someone who gives orders to Robin. Yet as we read on, his status is diminished. We hear that he ditched (line 4) Robin and had an affair with a married woman (line 10). We see him at the end all alone, cooking an unappealing meal for himself (chicken giblets in the pressure cooker (line 21), with next to nothing (line 22) in the house to eat. Can it be that he cannot manage by himself, without Robin around? He is shown as anxious to get going, punching the palm of [his] hand (line 23) with boredom, but unable to do anything. ...read more.

Next, a child (almost certainly a teenager) is told off by their mother for having allowed their yellow jacket to get dirty; a row develops. The child is sent to their room, but sneaks out at the dead of night to a phone box: interestingly, the narrator of the poem is waiting by the phone, but it doesn't ring. The child then returns home and meets a father figure who wants to make up. Stanza 4 deals with the reconciliation - a 'father figure' is asking a child to try on the yellow coat again, by stepping backwards into it, like in the trust exercise of stanza 1. It's not clear who this father figure is: perhaps it's the narrator's father, still in memory; perhaps it is the narrator himself addressing his childhood self (it's sixteen years or so before we'll meet); perhaps he is talking now to a friend or lover to whom the yellow coat incident happened when they were a child; perhaps it is the narrator, now a father, addressing his own child. The poem consists of 4 stanzas of varying lengths (4 lines, 7 lines, 6 lines, 6 lines). The lines are roughly equal in length, ranging from 9 to 13 syllables. The verse is therefore quite irregular (it doesn't fit a strict pattern), perhaps reflecting the idea in the poem that relationships can be awkward and don't follow a set pattern. Language Think about how the language the poet uses helps to convey his ideas. Here are some points to consider: * Consider the title of the poem. There are two homecomings described - one, when the child arrives back with a dirty jacket which leads to a family row, and one when the family embraces and all is forgiven. The second homecoming is the most significant: the child is welcomed 'home' into the love of the family. * Armitage gives us instructions on how to read the poem. ...read more.

Certainly the tone at the end of the poem is overwhelmingly one of warmth and connection between parent and child. Ideas The ideas in the poem all concern the relationships between children and parents. The table shows some key phrases from the poem, with commentaries describing what each one tells us about childhood and adulthood. Key phrase Commentary I'm waiting by the phone, although it doesn't ring .. The poet suggests that he is somehow anticipating his friendship with the grown-up child. It suggests he is there to offer help whenever it is needed. Questions / in the House. The line refers to the questions the mother is asking the child about the jacket; but you may have heard the phrase 'Questions in the House' before - it is used to describe Questions to a minister in the House of Commons. The issue is clearly crucial to her! these hands can fold / into a clasp ... Armitage is using a pun on clasp to emphasise the closeness of family. A clasp can be a fastening on a jacket, but also means a tight hold on something or someone. The child and their parents are 'clasping' each across the generations other now that they have made up. Comparison In the exam, you will be required to write about several poems, some pre-1914 and some post-1914. To which poems would you compare Homecoming? There will be a number of ways in which the poems can be compared, and you may well be able to think of ones which we have not! Poet and poem What to look for in your comparison Blake: Little Boy Lost / Little Boy Found - Both poems are about parent/child relationships. They examine trust in the relationship. For Blake, God is most trustworthy. Yeats: Song of the Old Mother Both poems deal with the tensions between different generations. Yeats writes from the point of view of the older generation, Armitage of the younger. Duffy: We remember your childhood well Both poems deal with a rift between the generations. The rift is never healed in Duffy's poem. ...read more.