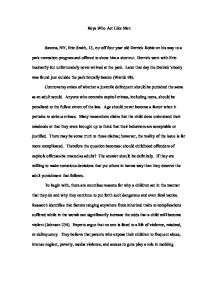 Kill a Monkey, Save Yourself

Boys Who Act Like Men Savona, NY, Eric Smith, 13, cut off four year old Derrick Robie on his way to a park recreation program and offered to show him a shortcut. Derrick went with Eric hesitantly but unfortunately never arrived at the park. Later that day the Derrick's body was found just outside the park brutally beaten (Wartik 98). Controversy exists of whether a juvenile delinquent should be punished the same as an adult would. Anyone who commits capitol crimes, including teens, should be penalized to the fullest extent of the law. Age should never become a factor when it pertains to serious crimes. Many researchers claim that the child does understand their misdeeds or that they were brought up to think that their behaviors are acceptable or justified. There may be some truth to those claims; however, the reality of the issue is far more complicated. Therefore the question becomes: should childhood offenders of capitols offenses be treated as adults? The answer should be definitely. If they are willing to make conscious decisions that put others in harms way then they deserve the adult punishment that follows. To begin with, there are countless reasons for why a children act in the manner that they do and why they continue to put forth such dangerous and even fatal tactics. ...read more.

Stories of teen murderers often work against research, "It was a wonderful family, this was just a wicked kid," but if you look under the rug you'll usually find that a tremendous amount of cruelty has happened to the child (Wartik 65). Most often, these disturbing experiences have lasting results on the child. The driving force of children that respond to certain situations violently is that they themselves are terrified of being the victim (Toch 213). "It is easy to think the infant or toddler is too small to understand violence, in fact, specifically that the experience is likely to take on particularly sinister and magical dimension." According to Beverly Jackson "Where violence is wholly unexpected, is combined with the actual loss of a parent or caregiver who is the center of the baby's world, the depression of a loved one or caregiver due to the loss, the fear of going outdoors, the belief that parents cannot be trusted to protect them, the impact is all the more severe." (Robinson-Briggs 120). A major effect of violence on a child is Post Traumatic Stress Disorder (PTSD). In many cases, if a person or child witnesses or become a victim of violence they later become offenders of it. "The damage doesn't end when the bullets stop flying" (Robinson-Briggs 103). ...read more.

The teen members hear the case and settle on a sentence that fits the offense (Williamson 210). The last method is The Young Offenders Act or YOA. This act established that the age of criminal responsibility is 12 years old, and said that youths can only be prosecuted if they commit a capitol crime. Many believe that this act has absolutely no effect on teens. It's never dealt with children under 12 and babies young adult's ages who are 16-17 who should be treated as adults. In turn, this act actually increases crime on the juvenile level. After reviewing this research, it is clear that juveniles and young adults are prosecuted very differently from adults. We haven't managed to come to a happy medium. At times they leave with a slap on the wrist, other times they sit in jail for years and years without fully understanding the severity of their offense. However, no matter what the age there should be no doubt that the punishment should fit the crime if committed on a capitol level. On the same hand, they need to re evaluate some of the rehabilitation efforts and keep in mind that though these children may have been raised to believe that this behavior is acceptable, it is not. ...read more.