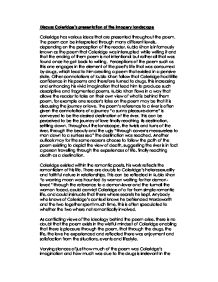 Coleridge has various ideas that are presented throughout the poem. The poem can be interpreted through many different levels, depending on the perception of the reader. Kubla Khan is infamously known as the poem that Coleridge was interrupted while writing it and that the ending of them poem is not intentional but rather all that was found once he got back to writing.  Perceptions of the poem such as this one engages in the element of the poet’s life that was consumed by drugs, which lead to him creating a poem that existed in a pensive state. Other connotations of Kubla Khan follow that Coleridge had little confidence in his poems and therefore turned to drugs, this increasing and enhancing his vivid imagination that lead him to produce such descriptive and fragmented poems. Kubla Khan flows in a way that allows the reader to take on their own view of what is behind them poem, for example one reader’s take on the poem may be that it is discussing the journey or love. The poem’s reference to a river is often given the connotations of a journey “a sunny pleasure-dome” is conveyed to be the desired destination of the river. This can be perceived to be the journey of love finally reaching its destination, settling down. Throughout the landscape, the twists and turns of the river, through the beauty and the ugly “through caverns measureless to man down to a sunless sea” the destination was reached. Another outlook may for the same reasons choose to follow the path of the poem existing to depict the view of death, suggesting the river is in fact a person travelling through the experiences of life, finally reaching death as a destination.

Coleridge existed within the romantic poets, his work reflects the romanticism of his life. There are doubts to Coleridge’s heterosexuality and faithful nature in relationships. This can be reflected in Kubla Khan “a warning moon was haunted By woman waiting for her demon-lover!” through the reference to a demon-lover and the turmoil the woman faced, could convict Coleridge of a far from simple romantic life, and could insinuate that there where secrets he kept. Anybody who knows of Coleridge’s context knows he befriended Wordsworth and the two together spent much time, this is often speculated to whether the two where not romantically involved.

As conflicting views of the ideology behind the poem arise, there is no doubt that the poem exists in the wistful mindset of Coleridge enabling that there is pleasure through the poem, that through the drugs, the life, the love he experienced and reflected there was enjoyment and satisfaction from the situations, events and lifestyle.

Varying stances of just how much of the poem was Coleridge’s imagination and how much was due to the drugs is irrelevant in the discussion of the imagery he incorporated through his words. The presence of the river in the poem is the main feature of the poem, however the imagery is caused though how the river is depicted and through the scenery the course taken. Evidence of this is found in the example of the river is made the focal point through it being the “sacred river” whereas the imagery is apparent in features such as “blossomed many an incense-bearing tree” enabling the scene of gardens, trees, and continuingly conveying the theme of nature.

Contrasting and ever changing is the tone and mood of the poem. The initiation of the poem is accompanied with the tone of pleasantries, enticing wonder and appreciation from the landscape itself. This enfolds into the divergent atmosphere where the beauty of the landscape is revealed to be a place of brutality and torment, the indication of this is discovered in various phrases constructed by Coleridge; “woman wailing for her demon-lover” and “ceaseless turmoil seething” Both of these highlight and capture the reader in that they quickly contrast the pre-established sense of security and sublime land. The manner again alters through the relapse into nature; the approach highlighted through nature is energy, although this tone is short lived as is cut across but the indirect calmness that is illustrated to allow the entrance of the river into the poem. Coleridge conveys this in the reintroduction to the river “mid these dancing rocks … it flung up momently the sacred river”. Again the tone of the poem develops from that of wonder at the river to one of pleasure, curiosity and intrigue at what can be seen this is shown through Coleridge’s use of indenting the text from line 31 to 34, it is successful in that it encourages the discourse of the text and situation, this is what is seen, not developed in perception but rather this is the way the scene is laid out. The referral back to the original alignment of the text for the concluding lines of the poem brings back the contrast and illusory nature of Coleridge’s thoughts.

Kubla Khan has a number of features that add to the atmosphere and ability of the poem. One of these features is the contrast and juxtaposition used by Coleridge throughout Kubla Khan. The instances of this are the contrasting of tone throughout the poem and also the juxtaposition in phrases, these are often used in referral to the dome, “sunny pleasure dome with caves of ice” however it occurs at other conditions in the poem, such as the suggestion of war, “Ancestral voices prophesying war” this is suggesting that ancestors, past lived creates are able to predict what is to come, contrasting the past the future. Not only are the constructed sentences created by Coleridge used to achieve results, the same can be said for the grammatical and poetic features used. Coleridge adds impact to the dispersion of the river into the sea through his use of a metaphor “a lifeless ocean”. Other poetic features are the repetition of the river and caverns, the context adds how these are the elements that Coleridge focuses on in importance to convey his point, which can be insinuated to be a journey, “the sacred river ran Through caverns measureless to man”. Accompanying this is the use of juxtaposition this is discovered through use of nature. Coleridge conveys the structure of nature, and the pre-laid course that the river runs, from the source to the ocean; he then juxtaposes this with the wildness of nature and reckless and violent pattern of the river, this adds to the fragmented and distorted mindset of the poet.

The use of imagery in Kubla Khan is effective, powerful and central to the purpose and delivery of the poem. Coleridge, whether through the impact of drugs, or simply a confused state of mind, wrote in a fragmented nature that lead to the course of the river seeming realistic and understandable. Through imagery and linguistic features Coleridge’s portrays the hallucinations of his mind in a way that is comprehendible