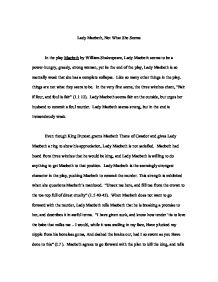 Lady Macbeth, Not What She Seems

In the play Macbethby William Shakespeare, Lady Macbeth seems to be a power-hungry, greedy, strong woman, yet be the end of the play, Lady Macbeth is so mentally weak that she has a complete collapse.  Like so many other things in the play, things are not what they seem to be.  In the very first scene, the three witches chant, “Fair if four, and foul is fair” (1.1 12).  Lady Macbeth seems fair on the outside, but urges her husband to commit a foul murder.  Lady Macbeth seems strong, but in the end is tremendously weak.

Even though King Duncan grants Macbeth Thane of Cawdor and gives Lady Macbeth a ring to show his appreciation, Lady Macbeth is not satisfied.  Macbeth had heard from three witches that he would be king, and Lady Macbeth is willing to do anything to get Macbeth to that position.  Lady Macbeth is the seemingly strongest character in the play, pushing Macbeth to commit the murder. This strength is exhibited when she questions Macbeth’s manhood.  “Unsex me here, and fill me from the crown to the toe-top full of direst cruelty” (1.5 40-43).  When Macbeth does not want to go forward with the murder, Lady Macbeth tells Macbeth that he is breaking a promise to her, and describes it in awful terms.  “I have given suck, and know how tender ‘tis to love the babe that milks me – I would, while it was smiling in my face, Have plucked my nipple from his boneless gums, And dashed the brains out, had I so sworn as you Have done to this” (I.7 ).  Macbeth agrees to go forward with the plan to kill the king, and tells Lady Macbeth, “to bring forth men-children only” (I.7.)  This shows how much power she has over Macbeth and how strong she seems.  Lady Macbeth is also extremely greedy and wants complete control over everything, even though she huualready has great importance in her kingdom and is incredibly wealthy.

Lady Macbeth helps Macbeth finish the murder by taking the daggers back to the chamber.  When she and Macbeth both have blood on their hands, Lady Macbeth says, “A little water clears us of this deed: How easy is it then!” (II.2 45-51).  This is another example of how things are not what they seem.  Macbeth goes on to continue killing others.  Lady Macbeth thought she was going to be happy with more power, but neither of the Macbeths are happy.  Macbeth starts killing anyone that suspects him of committing the murder, and even goes as far to kill his best friend, Banqo.  Lady Macbeth tries to cover for Macbeth when he sees the ghost of his murdered friend Banqo.  Even though she covers for him she still is criticizing him by saying “what! quite unmanned in folly” (3.4 75).  This showed that lady Macbeth still holds a large amount of power over Macbeth, but it seems like its getting to be too much for Lady Macbeth.

The very next time Lady Macbeth appears in the play, she is sleep walking and talking about the murders.  Where before, she thought a little water would wash away the blood from her hand, she now cannot seem to get her hands clean, and keeps making hand washing motions to clean the blood from her hands.  “Here’s the smell of the blood still: all the perfumes of Arabia will not sweeten this little hand.”  (5.1 43)  The doctor cannot cure her, and states, “infected minds To their deaf pillow will discharge their secrets; More needs she the divine than the physician;” (5.1 64-66).  Macbeth did murder sleep, “Cawdor Shall sleep no more: Macbeth shall sleep no more!” (2.2  35).  Lady Macbeth is so ill and weak the doctor has no cure.  As it turns out, Lady Macbeth is not as strong as she seemed in the beginning of play.  After the murders, she can no longer sleep because of the crimes committed, and finally dies a terrible death.

In the play nothing is as it seems, just when it looked as though everything was going to improve, it got even worse than it had ever been.  When lady Macbeth looked as though she had everything under control, she completely lost her mind.  Essentially Lady Macbeth died because she is so weak because of all the terrible deeds that she has done and can not live with them on her back anymore.