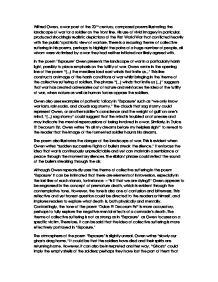 Wilfred Owen, a war poet of the 20th century, composed poems illustrating the landscape of war for a soldier on the front line. His use of vivid imagery in particular, produced shockingly realistic depictions of the First World War that conflicted heavily with the public’s patriotic view of warfare. There is a recurring theme of collective suffering in his poems, perhaps to highlight the pains of a huge number of people, all whom were victimised by a war they had neither initiated nor likely agreed with.

In the poem ‘Exposure’ Owen presents the landscape of war in a particularly harsh light, possibly to place emphasis on the futility of war. Owen wrote in the opening line of the poem “(...) the merciless iced east winds that knife us...” This line constructs an image of the harsh conditions of war whilst bringing in the theme of the collective suffering of soldiers. The phrase “(...) winds that knife us (...)” suggests that war has created adversaries out of nature and reinforces the idea of the futility of war, when nature as well as human forces oppose the soldiers.

Owen also uses examples of pathetic fallacy in ‘Exposure’ such as “we only know war lasts, rain soaks, and clouds sag stormy.” The clouds that sag stormy could represent Owen, or another soldier’s conscience and the weight of guilt on one’s mind. “(...) sag stormy” could suggest that the mind is troubled or at unease and may indicate the mental repercussions of being involved in a war. Similarly, in Dulce Et Decorum Est, Owen writes “in all my dreams before my helpless sight” to reveal to the reader that the image of the tormented soldier haunts his dreams.

The poem also illustrates the danger of the landscape of war. This is evident when Owen writes “sudden successive flights of bullets streak the silence.” It enforces the idea that war is continuously unpredictable and yet can maintain a semblance of peace through the momentary silences. The sibilant phrase could reflect the sound of the bullets streaking through the air.

Although Owen repeatedly uses the theme of collective suffering in the poem ‘Exposure’ it can be intimated that there are elements of introversion, especially in the last line of each stanza, for instance – “is it that we are dying?” Owen appears to be engrossed in the concept of premature death, which is evident through the contemplative tone. However, the tone is also one of confusion and bitterness. This reflective and yet honest question could be directed to the readers or himself, and implores readers to explore what death is, both physically and mentally. Contrastingly, the tone of the poem ‘Dulce Et Decorum Est‘ is more accusatory, perhaps to fully explore the negative mental effects of a comrade’s death. The theme of collective suffering is not as strong as in ‘Exposure’ as Owen focuses on a specific victim. Therefore, it can be said that the idea of collective suffering is more effectively portrayed in ‘Exposure.’

The atmosphere of the poem ‘Exposure’ is slightly unreal. Owen writes “slowly our ghosts drag home.” It could be that the soldiers have died and their spirits are returning home. However, it can also be interpreted another way. “Ghosts” could imply the empty shells of the soldiers; perhaps they have lost the part of them that makes them human. It depicts a surreal and almost ethereal atmosphere which in turn could give readers the idea that the landscape of war is filled not only with the living, the dead but also the ghosts of war.

Owen presents the landscape of war in ‘Exposure’ in a contrasting way to which war was viewed by the public and media during the First World War. He uses different literary techniques to emphasise the tone and atmosphere of the poem. Alliteration, pathetic fallacy and vivid imagery are some key literary devices that Owen uses in several of his poems. He shares experience of warfare in his poems, and in ‘Exposure’ it is rather effective, partly due to the use of strong imagery.