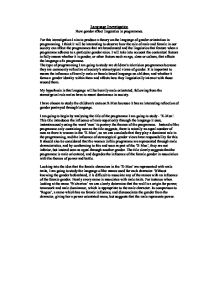 Language Investigation How gender affect linguistics in programmes. For this investigation I aim to produce a theory on the language of gender orientation in programming. I think it will be interesting to observe how the role of male and female in our society can affect the programmes that are broadcasted and the linguistics that feature when a programme adheres to a particular gender roles. I will take into account the contextual factors to fully assess whether it is gender, or other factors such as age, class or culture, that affects the language of a programme. The type of programming I am going to study are children's television programmes because they are commonly reflective of society's stereotypical views of gender. It is important to assess the influence of heavily male or female based language on children, and whether it forms a gender identity within them and affects how they linguistically interact with those around them. My hypothesis is that language will be heavily male orientated, following from the stereotypical role males have to assert dominance in society. ...read more.

Looking into the idea that the female characters in the 'X-Men' are represented with male traits, I am going to study the language of the names used for each character. Without knowing the gender beforehand, it is difficult to associate any of the names with an influence of the female gender. Nearly every name is associates with male traits. For instance when looking at the name 'Wolverine' we can clearly determine that the wolf is a origin for power, teamwork and male dominance, which is appropriate to the male character. In comparison to 'Rogue', a name which has no female influence, and disassociates the gender from the character, giving her a power orientated name, but suggests that the male represents power. This transcript is of a mostly male conversation, and reveals how the programme orientates towards this gender through it's language. The use of M1-4 represents the 4 different male characters in this scene, and F1 represents the only female character. ...read more.

In comparison, in this scene, she is represented as the supporting character, and inferior to the males. This suggests that the programme still has connotations of the weakness of the female gender. For instance when F1 says - "Oh, you poor baby!" her language suggests she is being supportive. The use of the word "baby" has maternal connotations, which is representative of stereotypical domestic and mothering views of females. The language associated with this programme portrays how the male gender dominates the linguistics of 'X-Men' which gives an insight into the general view of gender orientation of the programme. These two examples are more substantial in that they are repeated with every episode that a young child watches. It is important to analyse how a heavily male orientated programme effects children. We should consider that a child's perception of the reality of a television programme is somewhat unclear, and it's influence could change their gender associated behaviour and understandings. When watching 'X-Men' a young child receives language that has strong connotations of male dominance and power, which leads young children to gender roles themselves, which society have been trying to break for some time now. X-Men clip: http://www.youtube.com/watch?v=UmhvxsOwhqk ...read more.