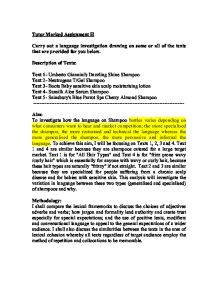 The text finishes with another idiom "hold your head up high" giving the reader a reason to be confident because of appearance ("you look great") which reflects the social context where appearance plays a great role in influencing people's confidence and the language on beauty products like shampoo bottles is very much determined by this. According to MAK Halliday's theory of Systemic Functional Linguistics, language cannot be disassociated from meaning and that language acts upon, and is constrained and influenced by social context. As mentioned in my "aim", the shampoo in Text 4 is faced with the similar challenges as Text 1 and therefore has to find strategic methods of persuasion to compete for exclusivity; unlike the pervasive hyperbolic lexis adopted in Text 1, Text 4 employs the lexis of health. Concrete nouns such as "serum" followed by the proper nouns "Aloe" and "Elida Hair Institute" and the abstract noun "natural" portray this product as health-conscious and scientifically credible. The scientific approach is further assisted by the verbs "developed" and "designed" which are commonly used in the areas of scientific research; these specific choices of verbs also carry the metamessage of exclusivity, custom made pattern, specifically and specially designed to fit its purpose or made with care and precision for the good of the consumer. Scientific language usually connotes precision and credibility, and advertisers commonly exploit the rigour and honesty we ascribe to science. As Halliday pointed out in his Systemic Functional Linguistics theory that language cannot be disassociated from meaning, and in this case, the choice of language is carefully selected based on society's stance on health which is the fear of death and illness especially Cancer which is often triggered by 'unnatural' products. ...read more.

This detail portrays Boots Baby as a brand that understands. The rhythmic repetition of the abstract noun "sensitive" and the adverb of manner "gently" set the tone for the whole text which is restrained, mild and sensitive considering that the subject (babies) is fragile. All of the shampoo bottles have a caption in their text for "Directions" regardless if it is the most basic type of shampoo. Though it is common sense on how to use shampoo and one does not necessarily need instructions on how to apply shampoo, shampoo bottles still follow a certain "structure of expectation". All of the shampoo bottles address the consumer directly using the second person pronoun. And finally all the shampoo bottles repeat their brand name throughout the text. Conclusion: It is clearly shown from the analysis above language on each shampoo bottles varies according to audience and market competition like Text 1 promising to be everything one can want in a shampoo bottle while Text 2 does not say much at all besides its specific purpose because both compete on different market, the latter being in a more niche market. I have found that this leads to the language on specialised shampoo to be less affected and moderate. These findings cohere with my aim. Evaluation: To substantiate my investigation further, I would have preferred a stronger example of a specialised shampoo instead of the baby shampoo (because it is becoming more competitive and generalised), something more comparable to Text 2 perhaps a shampoo for hair loss, which is more specialised. I will be sure to find more similarities in language use. ...read more.