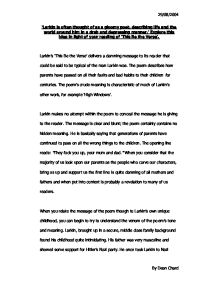 'Larkin is often thought of as a gloomy poet, describing life and the world around him in a drab and depressing manner.' Explore this idea in light of your reading of 'This Be the Verse'.

'Larkin is often thought of as a gloomy poet, describing life and the world around him in a drab and depressing manner.' Explore this idea in light of your reading of 'This Be the Verse'. Larkin's 'This Be the Verse' delivers a damning message to its reader that could be said to be typical of the man Larkin was. The poem describes how parents have passed on all their faults and bad habits to their children for centuries. The poem's crude meaning is characteristic of much of Larkin's other work, for example 'High Windows'. Larkin makes no attempt within the poem to conceal the message he is giving to the reader. The message is clear and blunt; the poem certainly contains no hidden meaning. He is basically saying that generations of parents have continued to pass on all the wrong things to the children. The opening line reads: "They fuck you up, your mum and dad." When you consider that the majority of us look upon our parents as the people who carve our characters, bring us up and support us the first line is quite damning of all mothers and fathers and when put into context is probably a revelation to many of us readers. ...read more.

The poem is written in an aggressive tone and swearing is frequent: "But they were fucked up in their turn". While this use of colloquial language has lost impact in today's society, it is still enough to shock the reader and catch their attention. In contrast to today's society though, this sort of message and use of language would have certainly been frowned upon during Larkin's heyday. Throughout the poem Larkin points to a vicious circle of generations of parents passing on their faults to their children: "They fill you with the faults they had, And add some extra, just for you." He accepts the circle as part of society and claims that it cannot be stopped or halted. To him, parents have no control over what they do, they pass on these faults whether they like it or not. In one way he is almost apologetic for those parents who pass on their faults: "But they were fucked up in their turn". He points to the fact that it was their parents who "fucked them up". ...read more.

Maybe the Victorian way of life suppressed Larkin so much he used his early poems as a release, a medium with which to vent his anger. In summing up, I personally feel that Larkin's message throughout the poem is fuelled by his ill feeling toward his own childhood. Another factor that must be taken into consideration is that Larkin was seemingly unable to commit to a relationship. This modest man was unlikely to have any children himself and maybe this poem's message was driven by jealously although this is only a personal thought. This poem also mocks religion and what religion stands for. Religion is renowned for showing people the right way to do things and what to believe in, yet the title of this poem sees Larkin casually dismissing religion, pointing to his own teaching as being one of more importance. The poem displays a continuous casual breaking of religious rules and clearly disregards religion's purpose. What is most intriguing about the poem is that Larkin considers the idea of parents passing on their flaws as a natural process that cannot be stopped. 29/08/2004 By Dean Chard ...read more.