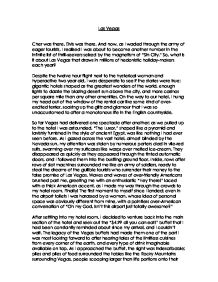 Las Vegas Cher was there. Elvis was there. And now, as I waded through the army of eager tourists, I realised I was about to become another number in the infinite list of thrill-seekers seized by the magnetism of "Sin City." So, what is it about Las Vegas that draws in millions of hedonistic holiday-makers each year? Despite the twelve hour flight next to the hysterical woman and hyperactive two year old, I was desperate to see if the stories were true: gigantic hotels shaped as the greatest wonders of the world, enough lights to dazzle the blazing desert sun above the city, and more casinos per square mile than any other amenities. On the way to our hotel, I hung my head out of the window of the rental car like some kind of over-excited terrier, soaking up the glitz and glamour that I was so unaccustomed to after a monotonous life in the English countryside. So far Vegas had delivered one spectacle after another; as we pulled up to the hotel I was astounded. ...read more.

As I pondered the question of why you would ever want to combine a lobster and a steak for your meal, or mix together ice cream and chicken (yes, really) I grabbed a plate and dug in. Either I was caught up in the excitement of limitless food, or I just wanted to join in on the gorging; however an hour and four Gaviscons later I was regretting the tonnes of food I had consumed. Nevertheless, my stay had overlapped onto New Year's Eve, and I knew that to stay in my hotel room that night trying to stop my stomach from exploding would be a way to miss a once in a lifetime opportunity. I didn't really know what to expect from a New Years Eve in Las Vegas, as it's usually spent with a civilised, if slightly boring, meal with the family, and a glass of champagne or two at midnight. I set off from the hotel around nine o'clock, noticing how the night had stolen away the arid weather and instead replaced it with a biting icy wind, and made my way to "the strip," the main road in Vegas which has all the grand hotels and gigantic casinos. ...read more.

Before I knew it, I was back on the twelve hour flight back to England, however this time the hysterical woman and hyperactive child didn't bother me, and even the awkward conversation in the toilets didn't horrify me as much. Instead, my mind was filled with the contrasting personalities of Las Vegas; at first I was seduced by its glamorous exterior, the flashing lights, the showgirls with their dazzling outfits, and the lavish hotels. However, it soon became apparent Las Vegas was a city that was built around disturbing ethics: strip clubs and cosmetic-surgeries were around every corner, and people were being exploited for every penny they had. Nevertheless, towards the end of my visit I saw that the city is full of people living a fast-paced high life, and if you can't keep up with it, well, that's your problem. I don't know whether I disapproved of this way of life, or whether I loved everything about the city. All I knew is that I had to go back, and soon! Cathy Wrigglesworth ...read more.