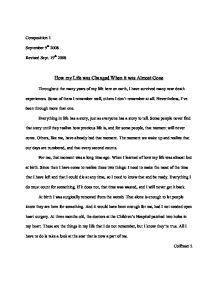 Composition 1 September 9th 2008 Revised Sept. 19th 2008 How my Life was Changed When it was Almost Gone Throughout the many years of my life here on earth, I have survived many near death experiences. Some of them I remember well, others I don't remember at all. Nevertheless, I've been through more than one. Everything in life has a story, just as everyone has a story to tell. Some people never find that story until they realize how precious life is, and for some people, that moment will never come. Others, like me, have already had that moment. The moment we wake up and realize that our days are numbered, and that every second counts. For me, that moment was a long time ago. When I learned of how my life was almost lost at birth. Since then I have come to realize these two things: I need to make the most of the time that I have left and that I could die at any time, so I need to know that and be ready. Everything I do must count for something. If it does not, that time was wasted, and I will never get it back. At birth I was surgically removed from the womb. ...read more.

Some people say that the word, "almost," only works with horseshoes, hand grenades, and halitosis. I say that almost dying means that it was too close to judge, so let it change you. A couple of years after missing the accident, I was up for a leisurely family weekend at my grandparent's cabin. They live in a beautiful log home near Brainerd, Minnesota, on the Whitefish chain of lakes with a nice sand beach. Coffman 3 As always the family gets together for a family reunion. We all help get the boats, lifts, docks, and the raft in the water. This year I helped put out the raft. After a quick and easy process of taking it out and chaining it down, my cousins and I tested it out. Our grandparents have this rule that each year we have to show them that we know how to swim. If we do, then we do not have to wear our life jackets. Since putting the raft in was our first time in the lake, we hadn't had our little test. That meant we were all supposed to be wearing life jackets, which we weren't. The white sugar sand from the beach was all over the blue carpet of the raft, and to wash it off my older cousin started to rock the raft so that water would come up and sweep away the sand. ...read more.

I don't want to just stop there, I want to keep going. Several millionaires have said that making that first million is like trying to fly without an airplane and after that it's like flying a kite. So after that first success, everything that's done to get you to the next step is easier than getting to the first. Knowing that I could die at any time, and being ready for that time, means that I must keep going like there is no tomorrow. I have to try not to assume that I will be doing anything tomorrow, because there might not be one. That doesn't mean I don't make plans, it means that I live one day at a time, and take each day as it comes. Don't worry about what comes next, instead focus on what is happening now. It is not always easy, but I just keep telling myself that everything will work out no matter what. By knowing that I need to make the most of the time that I heve left and that I could die at any time, I can honestly say that I am not worried about death, or scared to die. I know that death must come for everyone, some sooner than others, and there is no getting around it. No matter how many times you come close, and almost die, there will be a time where almost just won't cut it. ...read more.