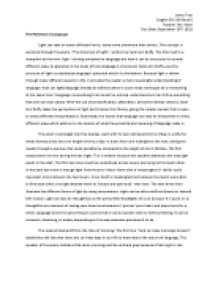 Light can take on many different forms, some more prominent than others. This concept is explored through the poem, The Grammar of Light, written by Carol Ann Duffy.

﻿Jenny Tran English 30-1 IB Block 8 Teacher: Ms. Rault Due Date: September 25th, 2012 The Potential of Language Light can take on many different forms, some more prominent than others. This concept is explored through the poem, ?The Grammar of Light?, written by Carol Ann Duffy. The title itself is a metaphor as the term ?light? is being compared to language and how it can be structured in several different ways. As grammar is the study of how language is structured, Carol Ann Duffy uses the structure of light to emphasize language?s potential and/or its limitations. Because light is shown through many different aspects in life, it provides the reader a more meaningful understanding of language. How can light/language literally be defined when it could mean nothing at all or everything at the same time? Language is something that cannot be entirely understood but can still be something that one can learn about. With the use of personification, alliteration, and other literary devices, Carol Ann Duffy takes the perceptions of light and stresses this theme, giving the reader a poem that is open to many different interpretations. Essentially, this shows that language can also be interpreted in many different ways which adds on to the tension of what the potential and meaning of language really is. ...read more.

The shards of broken glass reflect light in so many different directions that it may look as if it?s weeping. Merging with the third stanza, the speaker indicates that some mornings can also be ?fluent? and not as sharp and broken as glass or as dull as a grey sky. The beautiful image of nature and how trees can be in sync with one another through the actions of telepathy shows the smooth and graceful ways light can expose us to such beauty. Light can also allow a person to take three separate ideas and harmonize them together and make one image; a waiter holding a platter with coins in his pocket and a large tower behind him with a bell ready to tell the time. These two stanzas show how language can sometimes either be very rough and unpleasant some days but can also be very eloquent and graceful some other days. The language that an individual speak cannot always be smooth as they want it to be. In the fourth stanza, another shift occurs from a time of day to the time of evening. The reoccurring use of personification happens again in the first line, ?even a saucer of rain? speaks to the eye?, highlights the power of light/language. ...read more.

The language spoken by the person is held within them and dies with them. In this stanza, language can be interpreted as very calming, even in the times of death. Because everything is not as clear in this stanza, and the candle ?slurs?, language cannot really be given a clear and straightforward definition. Throughout one?s whole lifetime, language can still not be exactly defined and this adds on to the tension of what language can really mean. Throughout the entire poem, there are six repetitions of the words, ?the way?; once in every stanza for the first four stanzas and twice in the last stanza. In the poem, light itself is not important. It?s the ways of how light is expressed. Comparing that to language, language itself is not important. But the way one speaks, interprets, articulates, and modifies their words is important because it helps a person learn the potential of language and also its limitations. Everyone has their own unique way of expressing themselves, and like this poem, language can be interpreted in so many different ways. Surely, there are many ways to interpret this poem as well. Carol Ann Duffy uses the idea of light to allow readers to answer the question themselves; what is language? It could come to a resolved impression to be something that has many definitions or none at all, depending on the way one likes to think of it. ...read more.